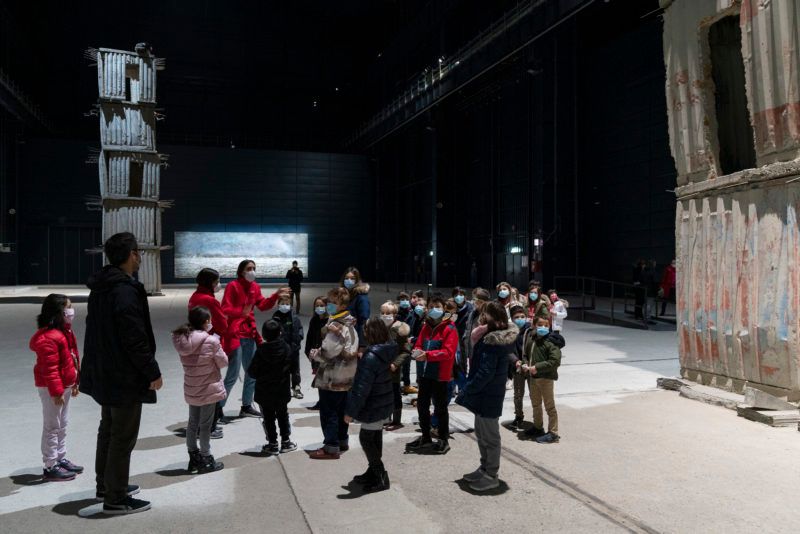 Introduction
As well as having their own mathematical value, numbers can also have symbolic value and thus be open to a number of interpretations: numbers are such an intrinsic part of daily life that we often fail to notice their importance. And yet, since the most ancient times, they have played a fundamental role in enriching and giving meaning and value to the most magnificent works of art. In Anselm Kiefer’s The Seven Heavenly Palaces 2004-2015 we find many references to the world of numbers: the repetition of individual modules, the use of the double, the choice of the number seven, the presence of long series of numbers on pieces of glass, the numbering of strange rocks, and more besides. The children will discover how a number used apparently randomly can bring with it a whole array of mean­ings, whether universal or subjective, immediate or hidden, shared or personal.

Educational Objectives
This activity helps children find out about and enter into the world of numbers in a simple, direct way. They will need to look very carefully at the work and find elements linked to the world of numbers, such as the modules and multiples, and the presence of doubles. The significance of numbers in the work will be investigated, linking them to what the pupils have already learnt at school and bringing out the multiple range of concepts that numbers represent.

Activities
Starting out from identifying important numbers that are significant in their daily lives, the children will examine how important numbers are for recognising and understanding the world around them. During the workshop activities, each child will be able to make a cube into which they can insert all the numbers that are important in their lives, linked to their personal lives or to school, and they will be helped to give these numbers the right level of importance. Starting out from this cubic module, which is the same for everyone, the class will together make a construction, taking inspiration from Kiefer’s towers, or creating new surprising forms. Starting out from their individual works, the children will then be invited to create a collective work in which the individual “voices” come together in a choral composition. This will give value to the contributions of each child, whose individual peculiarities will gradually decide the shape of the collective work.

One name: Lots of Shapes and Colours (lower primary)

The Circle of Time (upper primary)

Who Am I? Who Are We? (upper primary)