The Dream Machine is Asleep The solo show “The Dream Machine is Asleep,” by Eva Kot’átková (Prague, 1982) is an original and immersive project in which existing works are placed side by side with new productions, including installations, sculptures, over-sized objects, collages and performances. Starting from a vision of the human body as a machine, a great organism of which the functioning requires checking, regeneration and rest, and from the idea of sleep as a moment in which, through our dreams, we come up with new visions and enter parallel worlds, the exhibition explores our most intimate projections and thoughts, as well as the angst and disorientation of contemporary living. 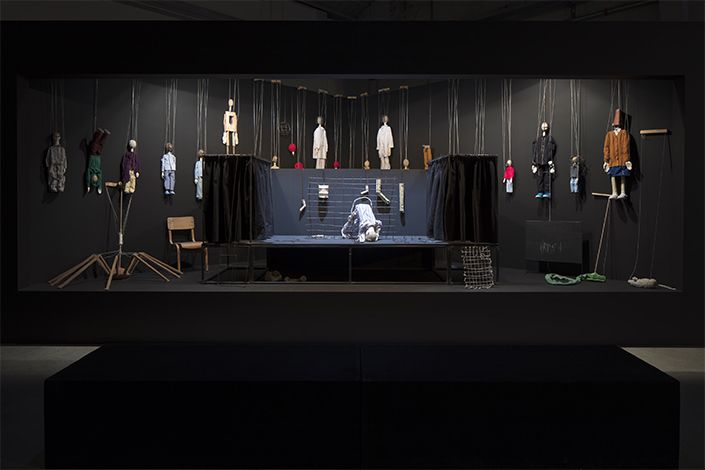 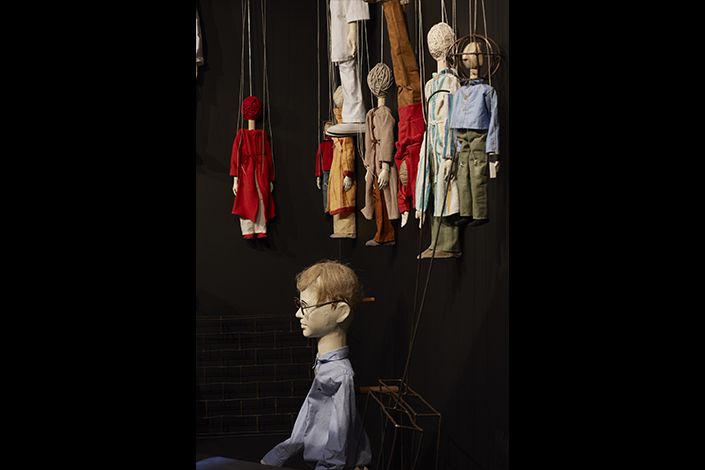 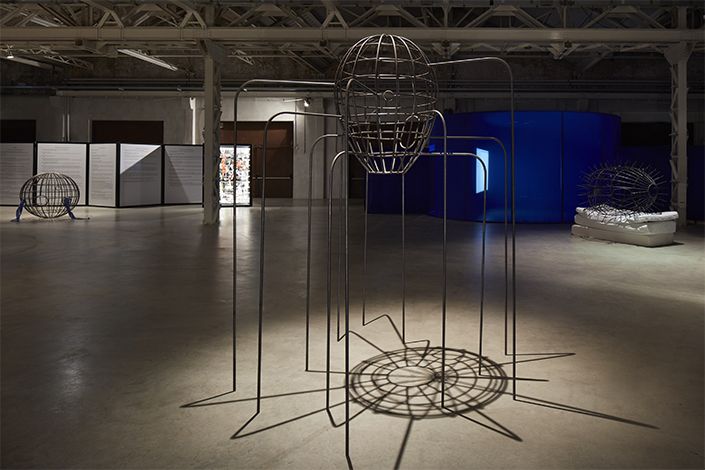 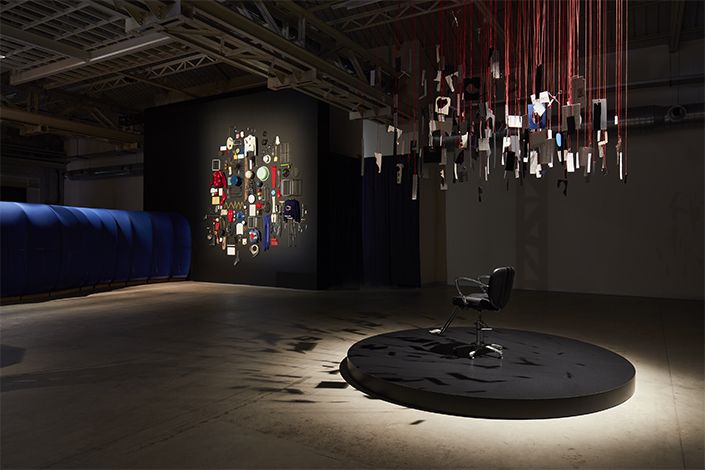 At the center of “The Dream Machine is Asleep” there is the installation of the same name: a gigantic bed, at the base of which there is what the artist defines as an office for the creation of dreams. With this work, Eva Kot’átková continues her research into the systems that regulate our lives, countering them with imagery from the universe of childhood in order to make up for the lack or the loss of imagination.
In order to access the exhibition space, the visitors are invited to pass through the work titled Stomach of the World (2017), an allegory of the world, described as a chaotic organism which alternates between processes of ravenous assimilation and moments of stasis, empathy or clashes between its inhabitants, and periods of control, digestion, expulsion and recycling of the ‘waste’ produced, in other words its phobias and states of angst. The work, comprising of a video presented inside an installation which may be accessed by visitors and which takes on the stylized design of a stomach, makes use of protagonists and imagery taken from the world of childhood and mythology.
Inside the space of the Shed at the Pirelli HangarBicocca, numerous over-sized objects punctuate the entire show, placing the public face to face with imagery halfway between fantasy literature, the neurological sciences and psychiatric disorders. Alongside a series of seven enormous metal heads (Heads, 2018), which are activated and completed by the presence of performers who relate to them motionlessly, just by posing, visitors may also browse through the pages of books standing some two meters high. These books (Diaries, 2018) feature small sculptures and collages—a medium broadly adopted by Surrealism and much loved by Eva Kot’átková by virtue of its intrinsic nature of joining together different fragments and elements to create new compositions—and represent a diary in which thoughts and notes around dysfunctions and peculiarities of the todays world are collected.
In Theatre of Speaking Objects (2012), on the other hand, eleven everyday objects and furnishings such as a vase, a door or a wall adopt anthropomorphic characteristics, becoming the bearers of hidden traumas. The work was presented at the 18th Biennale of Sydney and is inspired by a series of sketches by the Czech architect Jiří Kroha (1893-1974), who in the ’20s had imagined a theater play using simple everyday tools to then endow with human voices and characteristics. In the cacophony of voices, which all speak different languages, and in the use of objects as a surrogate of the human body, Eva Kot’átková highlights situations in which it is not possible to express oneself freely, instead providing the chance to do so through this form of indirect communication, using objects as mediators.
The entire show is conceived as an organism which, through programmed performances, is brought to life and inhabited by figures who wander through the space, activating the works through simple static actions, with more complex choreographies or through the recounting of ad-libbed oral narratives. Thus, in Asking the Hair about Scissors (2018), from an anomalous and surreal hairdresser, visitors may be witness to tales freely composed by Eva Kot’átková on the basis of news stories. By asking to do away with a part of one’s own body—the hair—the artist explores the notion of fragmentation. With Her Wanderings Over and Mine Just Beginning The Phonetic Orchestra | With Her Wanderings Over and Mine Just Beginning Eva Kot’átková | The String That Runs in my Head from One Side to the Other, 2018