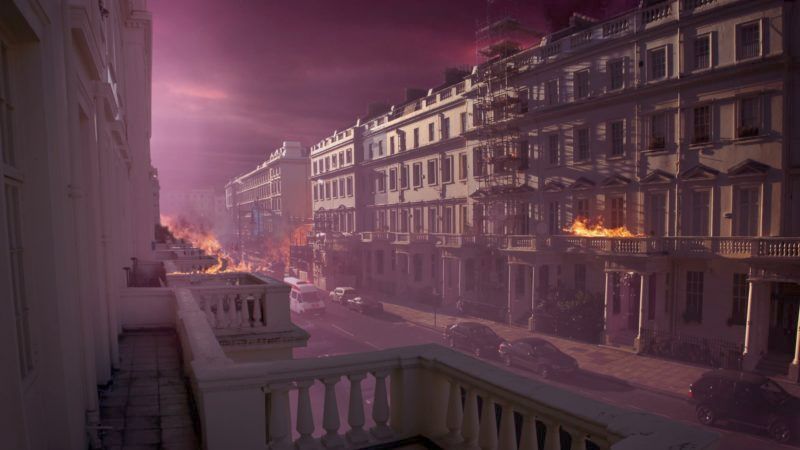 The Public Program devoted to Neïl Beloufa’s exhibition “Digital Mourning” opens with an extended evening of big-screen open-air cinema, including four of the artist’s most iconic films in a sequence that reveals the cinematic dimension of his work. In the “Digital Mourning” exhibition, Beloufa deliberately removed his films from full viewing, displaying only fragments of them within his installations or showing them on visitors’ digital devices.
Over his career, Beloufa has realized a significant number of films and videos, many of which have been presented at important film festivals such as the International Short Film Festival Oberhausen and the Berlinale.
The titles selected for the screening, presented in chronological order, are Kempinski, Brune Renault, Party Island and Occidental. The program also includes some episodes of Screen Talk (2020—ongoing) a web-based mini-series adapted from another video by the artist, Home is Whenever I’m With You.
Shorts and feature films offer an overview of the styles and visual languages of Beloufa’s audio-visual works, ranging from sci-fi to docufiction, to road movies and dystopian fantasy, in which the artist looks back over the stereotypes of our society and its cinematographic models through irony and paradoxical positions.

All the films are in the original version with English subtitles

Kempinski (2007), the first film made by Beloufa when he was still a student, was shoot on a trip to Bamako (Mali), and it presents a future that is both dreamlike and dystopian. Taking the form of a fake documentary, or docufiction, the film reverses cultural stereotypes about global north and global south, present and future, anticipating  the aesthetics of Afrofuturism.This work brought international recognition to Beloufa as one of the most promising artist/filmmaker of his generation, capable of subverting categories and languages between art and cinema.

In Brune Renault (2010), a red Renault 11 is at the heart of a road movie with four teenagers, two girls and two boys, as they drive through the night, engaging in brief conversations that range from gossips to jealousy and seduction, suggesting romantic tensions. The film consists of a series of episodes without a clear beginning or end, but the same excerpt from Johnny Hallyday’s cover version of The House of the Rising Sun accompanies each of them, connecting the different chapters.

Party Island, a short film made in 2012, reproduces, against a deliberately artificial, low-fi backdrop, stereotypes drawn from TV series, advertisements and reality shows dominated by the idealised consumerist imagery of exotic holidays, parties and leisure that are as carefree as they are unreal. Throughout the film, the protagonists—young women and good-looking men devoid of any sense of identity—recite slogans, clichés and exclamations of enthusiasm and enjoyment, creating an increasingly disorienting and at times hilarious effect in the viewer.

Occidental (2017), presented at Berlinale in 2017, is a reflection on the ephemeral boundaries between reality and fiction, subjectivity and objectivity, prejudice and the impossibility of adopting an impartial point of view. The film was shot in the artist’s studio, in which he built a full-scale set that reproduces in detail the Hotel Occidental, an imaginary 1970s-style hotel, whose name recalls the rhetoric of colonialism. Against a backdrop of Paris under siege, with demonstrators and barricades filling the streets, Antonio and Giorgio, two Italians who present themselves as a couple, go to the hotel reception desk and ask for a suite. Diana, the hotel director, is suspicious of the intentions of the two men, who speak French to each other, and she calls the police, creating a whirlwind of tensions and subterfuge that involves other guests and hotel employees. In such a deceptive situation, it is impossible to understand where the truth lies and it is difficult to go beyond prejudices as homophobia, racism, misogyny and the fear of a hypothetical terrorist attack.

Screen Talk (2020—ongoing) is an experimental project for online production and distribution that adapts the video Home Is Whenever I’m With You (2014) into a mini-series for the web. The film is set in a world overrun by a pandemic in which two pharmaceutical laboratories compete to find for a cure against a virus. Fictitious and dystopian, ironic and paradoxical, the film takes on new meanings now, with its critical vision and its ability to anticipate today’s world, in which social relations occur exclusively in digital form. In occasion of the Pirelli HangarBicocca’s show, Beloufa is also presenting it as an installation in the exhibition space.