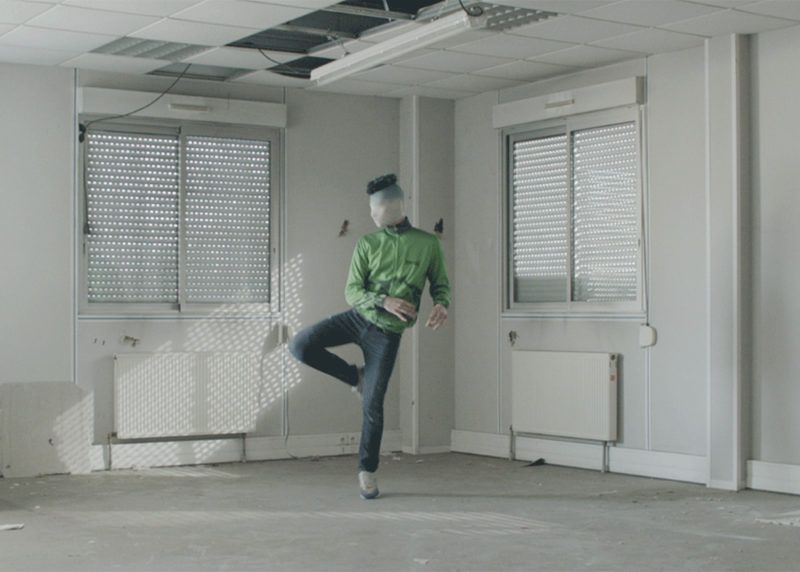 Pirelli HangarBicocca presents the second event of the Public Program devoted to Neïl Beloufa’s exhibition: a performative project conceived by the French collective (LA)HORDE, at the direction of the Ballet national de Marseille, in dialogue with the artist. The exhibition “Digital Mourning” becomes the stage for a reflection on the relationship between idealisation and material (hyper)reality, constantly shifting between offline and online.
The three jumpers Magali Casters, Edgar Scassa aka Edx and Kevin Martinelli aka MrCovin “inhabit” the exhibition space for three hours with jumpstyle movements, a dance style part of Hard dances such as hakken and shuffle, and born in the 2000s clubs in continuation of the Mainstream Hardcore Dutch movement. In the recent years, this subculture has spread through social media, especially TikTok, and influenced an increasing number of people through video recordings and dance tutorials. The Jumpers—as those who practice this form of dance are called—position themselves in various points around the show and perform brief sequences of movements in front of their own device: dancing and filming oneself in front of the mirror of the camera can be considered as part of the process of a “post-internet dance”. The rhythmic sequences are recorded and shown in digital format on the museum’s social media channels.
The public is able to enjoy the exhibition under the usual circumstances, with the chance of occasionally coming across moments of performance that reconfigure the Jumpers’ bodies as new works of art. During the event the film Novaciéries (2015, 16’43’’) is screened, a project by (LA)HORDE that mixes cinematographic images shot by a movie crew but also performance captations with the cast of the film and homemade videos made by the interpreters themselves shared on YouTube and other social platforms. Novaciéries is a combination of cinema, performance, and home video that transcends dance films and presents a choreographed and metaphysical portrait of the post-industrial world.

Since 2013, (LA)HORDE brings together the artists Marine Brutti, Jonathan Debrouwer and Arthur Harel. This collective of choreographers and visual artists, who took on the direction of the Ballet national de Marseille in 2019, has always developed a collaborative project with several online communities that has given rise to several multidisciplinary and cross-community creations. Through films and performances (Novaciéries, 2015; The Master’s Tools, 2017; Cultes, 2019; the video clip Room With A View, 2020), and choreographic pieces (To Da Bone, 2017; Marry Me in Bassiani, 2019; the program Childs Carvalho Lasseindra Doherty, 2020), (LA)HORDE interrogates the political component of dance and maps diverse choreographic forms of popular uprising, transitioning from raves to traditional dances, as well as jumpstyle. Their exploration of the new dynamics of circulation and representation of dance and body that develop online led them to work on the concept of “post-internet dances”. In 2021, with the Ballet national de Marseille they invited for a mixed program choreographers Lucinda Childs, Tania Carvalho, Lasseindra Ninja and Oona Doherty—each embodying their own iconic, inclusive and engaged conception of dance. By diversifying formats, (LA)HORDE questions the almost infinite serendipity that this new territory provides and proposes multiple perspectives on the uprisings of the communities with whom they work in a heterarchical way.