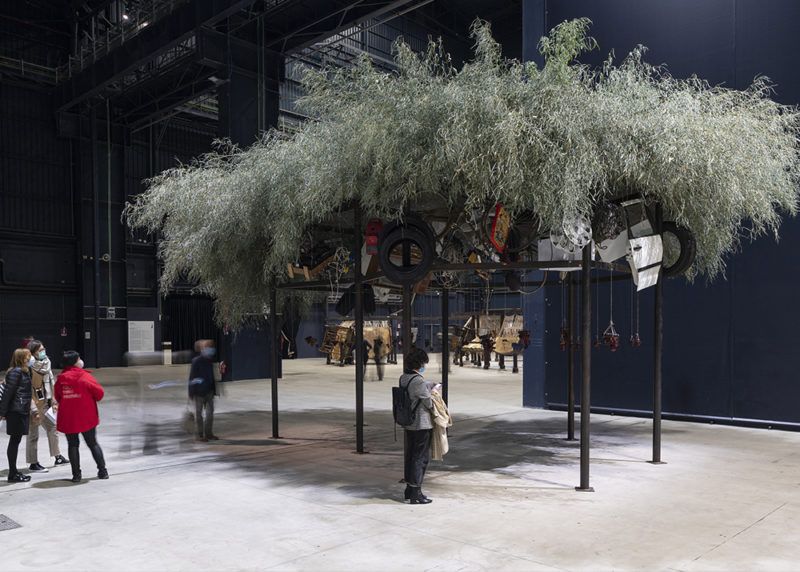 On the occasion of the last two weeks of Chen Zhen’s exhibition “Short-circuits”, Pirelli HangarBicocca is offering a guided tour in the form of a conversation between Hou Hanru and Marco Scotini on Wednesday May 26 at 7 PM.

Hou Hanru, Artistic Director of MAXXI in Rome, was very close to Chen Zhen and his work in Paris between 1990 and 2000. An expert on the artist’s oeuvre, he was one the first promoters of Chinese art in Europe through groundbreaking exhibitions as “Cities on the Move” (1997-1999) and “Z.O.U.—Zone of Urgency” (at the 50th Venice Biennale, 2003). In 2015, Hanru also presented a Chen Zhen retrospective at the Rockbund Art Museum (RAM) in Shanghai.

Marco Scotini, Artistic Director of the FM Centre for Contemporary Art, Milan, and Head of the Exhibition Program of the Parco Arte Vivente (PAV) in Turin, is author of one of the essays in the “Short-circuits” exhibition catalogue. He has been working for many years on the relationships between cultural experiences in diverse geopolitical settings and has an in-depth understanding of the relationships between the visual languages of Eastern and Western art. He has recently accomplished two important projects in China: the 1st Anren Biennale (2017), of which he was Co-curator, and the 2nd Yinchuan Biennale (2018), of which he was the Director.

The conversation—conducted in Italian—takes its cue from the works on show and then examine the cultural, historical and biographical aspects of Chen Zhen’s art, offering visitors a variety of insights and possible interpretations. The public is able to listen to the conversation through headphones while being in direct contact with the works in the exhibition space, and always at a safe distance from other visitors. The guest speakers are available for questions at the end of the visit.

Hou Hanru is the Artistic Director of MAXXI in Rome. Born in Guangzhou, he graduated from the Central Academy of Fine Arts in Beijing and has spent several years living in Paris and San Francisco. He has curated many exhibitions throughout the world, as well as numerous biennials, including the French Pavilion at the 48th Venice Biennale in 1999, the “Z.O.U.—Zone of Urgency” exhibition in 2003, the Chinese Pavilion in 2007, the Shanghai Biennale in 2000, the Tirana Biennial in 2005, the Istanbul Biennial in 2007 and the Lyon Biennale in 2009. He was the Co-director of the first Guangzhou World Biennale Forum in 2012, and the Curator of the 5th Auckland Triennial in 2013. He was also the Co-curator of the Bi-City Biennale of Urbanism\Architecture in Shenzhen in 2017. He is a Consulting Curator for The Robert H.N. Ho Family Foundation Chinese Art Initiative at the Solomon R. Guggenheim Foundation/Museum, New York.

Marco Scotini is the Artistic Director of the FM Centre for Contemporary Art, Milan, and Head of the Exhibition Program of the Parco Arte Vivente (PAV) in Turin. He is the Scientific Director of the Archivio Gianni Colombo and of the Bert Theis Archive. He has been a member of the Italian Council since 2019 and Head of the Visual Arts Department of NABA since 2004. After working with many international art institutions (the Van Abbemuseum, Eindhoven, Documenta, Kassel, MAXXI, Rome, SALT, Istanbul, and Castello di Rivoli), he curated the Albanian Pavilion at the 56th Venice Biennale (2015), co-curated the 1st Anren Biennale in China (2017) and was Artistic Director of the 2nd Yinchuan Biennale (2018). His recent publications include Utopian Display: Geopolitical Curating (Macerata: Quodlibet, 2019), Politiques de la Végétation (Les Lilas: Eterotopia France, 2019), and Artecrazia (Roma: DeriveApprodi, 2017).