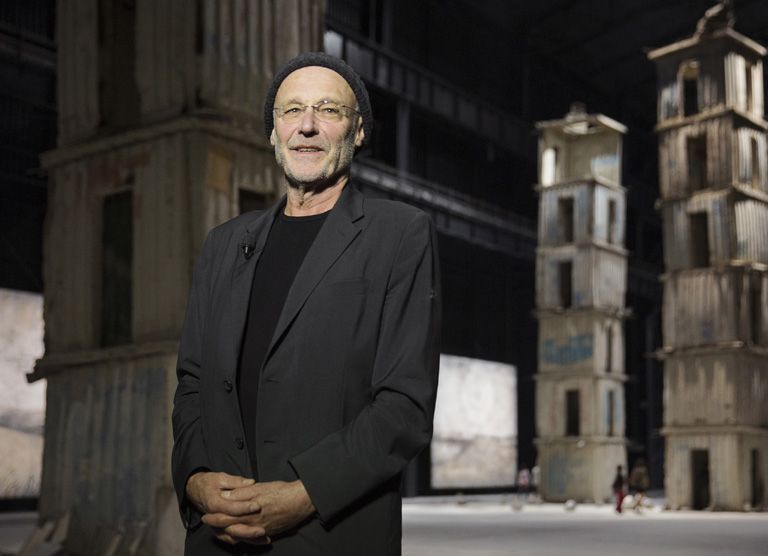 Admission to the exhibitions is free, upon reservation. Book now through the dedicated tool on our homepage pirellihangarbicocca.org

Conceived and presented for the opening of Pirelli HangarBicocca in 2004 and based on a project by Lia Rumma, the permanent site-specific installation by Anselm Kiefer—The Seven Heavenly Palaces—owns its name from the palaces described in the ancient Hebrew treatise Sefer Hechalot, the “Book of Palaces/Sanctuaries,” which dates back to the 4th-5th centuries A.D. The volume narrates the symbolic path of spiritual initiation that anyone who wants to become closer to God must undertake.

Works by Anselm Kiefer on display

The seven towers—each of which weighs 90 tons and rises to heights varying between 13 and 19 meters—were created from reinforced concrete using the angular construction modules of shipping containers. The artist has inserted, between the various levels of each tower, lead books and wedges which, compressing beneath the weight of the concrete, further guarantee the static nature of the structure. More than mere functional value, for Kiefer the use of this metal has symbolic meaning: in fact, lead is traditionally considered the material of melancholy. 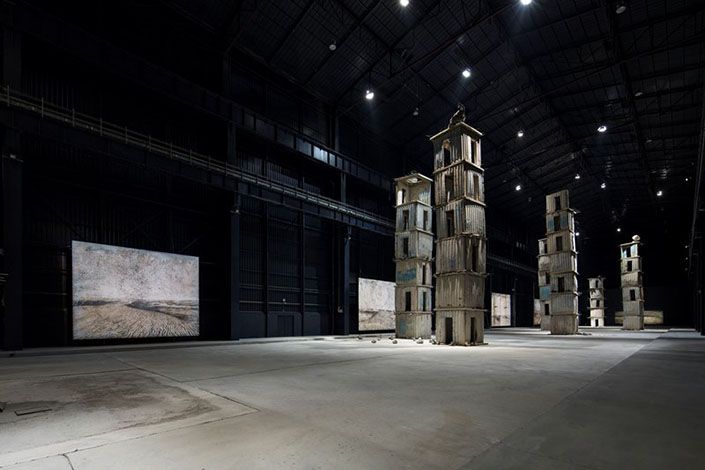 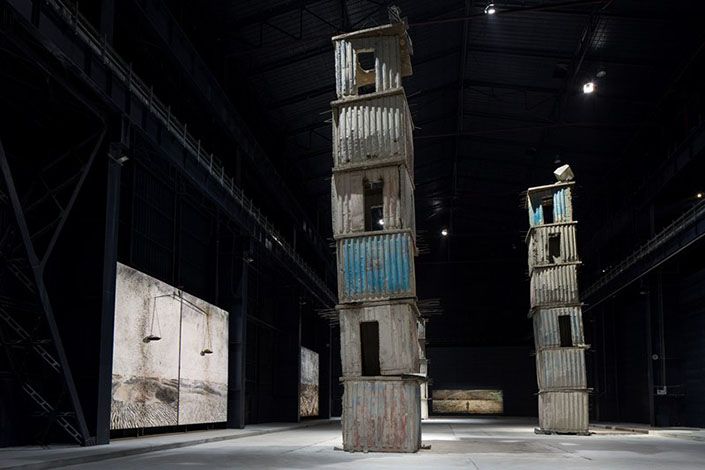 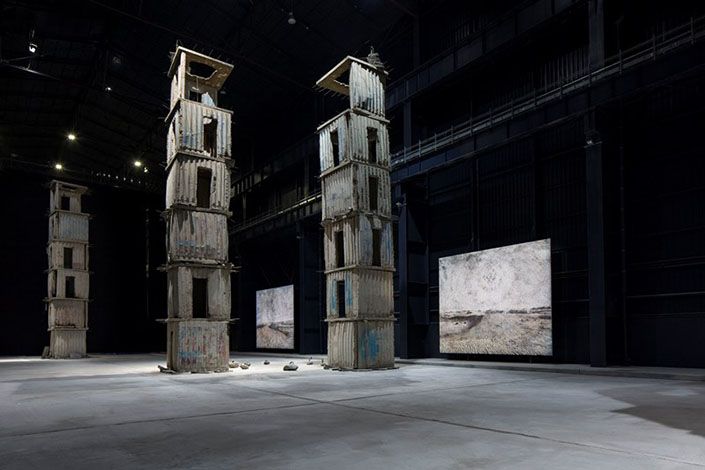 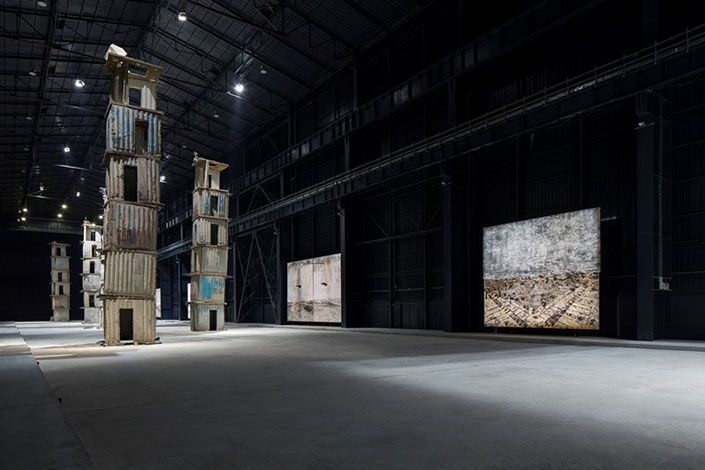 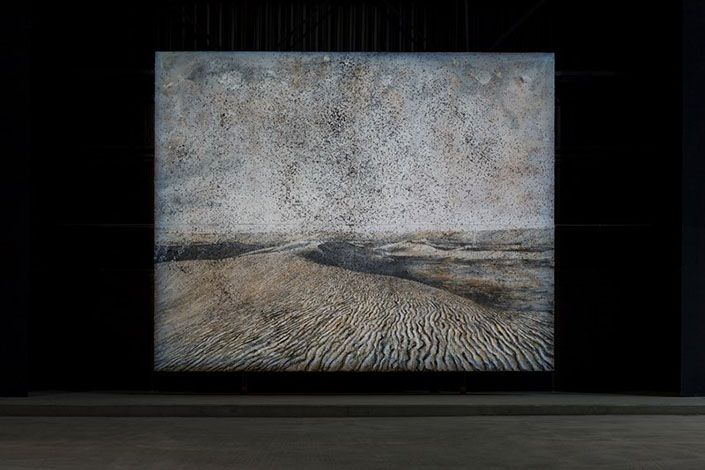 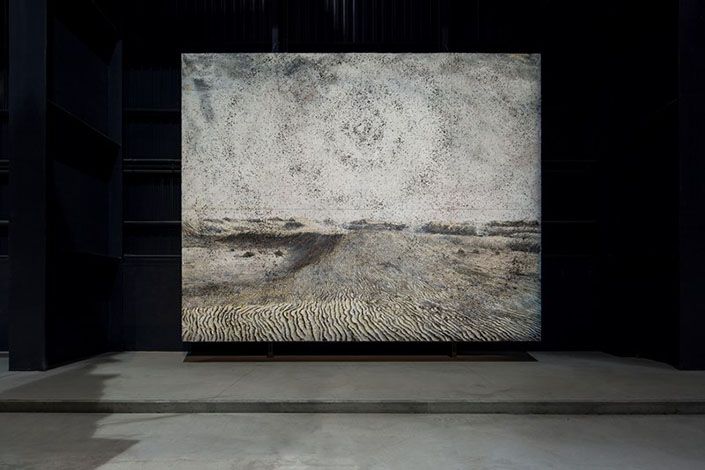 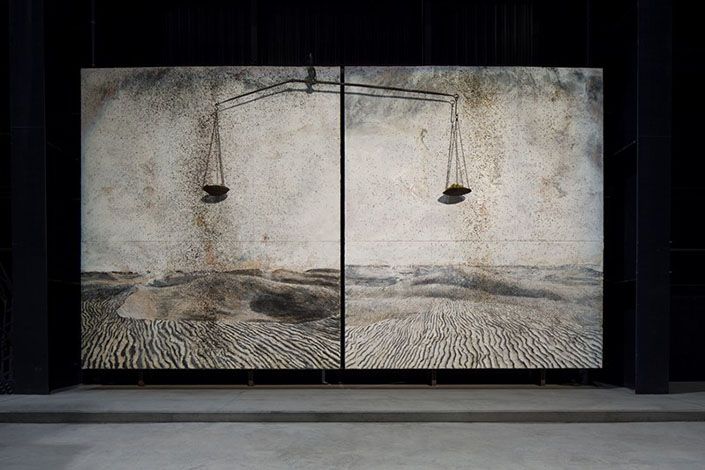 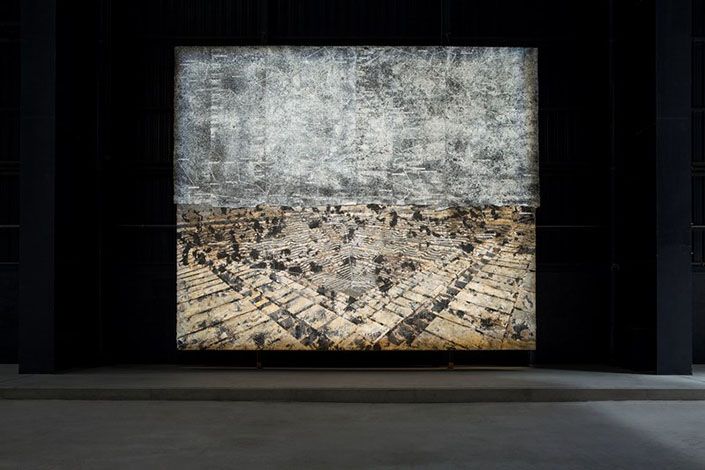 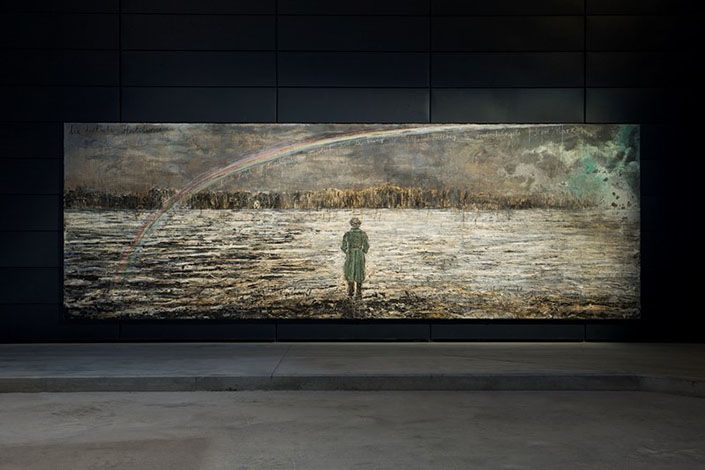 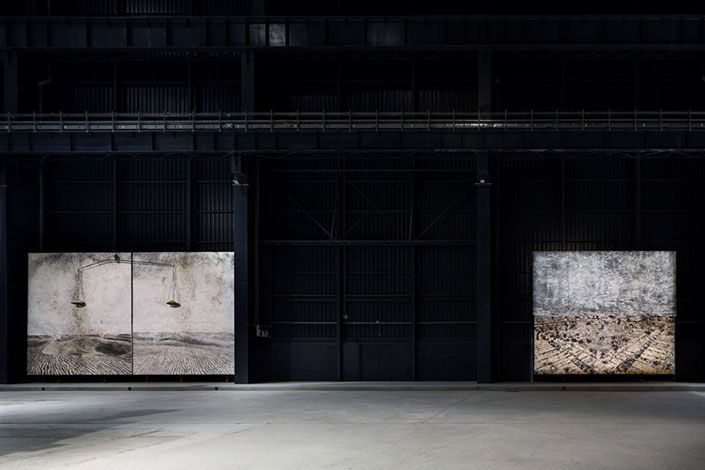 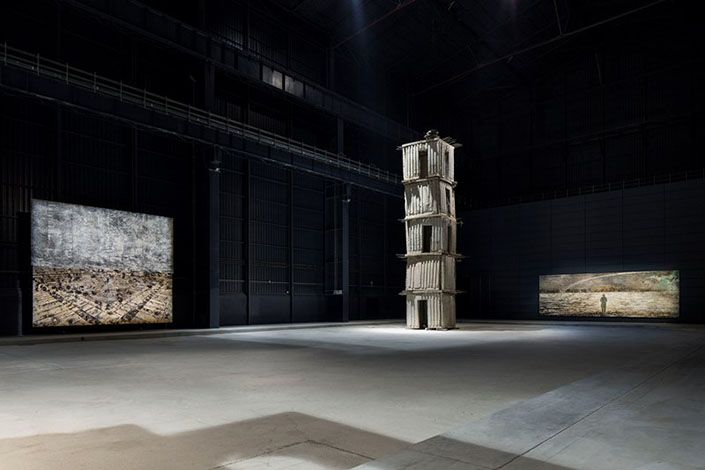 The Seven Heavenly Palaces represents a point of arrival for Anselm Kiefer’s entire artistic production, synthesizing his principle themes and projecting them into a new timeless dimension: they contain an interpretation of ancient Hebrew religion; a representation of the ruins of Western Civilization after the Second World War; and projections into a possible future through which the artist invites us to face the present.
Since September 2015 five large canvases—produced between 2009 and 2013, and exhibited for the first time—enrich and expand the permanent installation. This additional display, curated by Vicente Todolí, reconsiders and confers new meaning on the artist’s work. The paintings—Jaipur (2009); two works of the series entitled Cette obscure clarté qui tombe des étoiles (2011); Alchemie (2012) and Die Deutsche Heilslinie (2012-2013)—are on show in the “Navate” space which hosts the permanent installation, giving new meaning to Anselm Kiefer’s masterpiece. These paintings form, together with the “towers”, a single installation entitled The Seven Heavenly Palaces 2004-2015, which addresses themes already present in the site-specific work: large architectural constructions of the past as man’s attempt to ascend to the divine; constellations represented through astronomical numeration. They also add a number of considerations that are key to the artist’s poetic vision, including the relationship between man and nature, and references to the history of ideas and of Western philosophy.

Anselm Kiefer was born in Donaueschingen (Germany) in 1945. He dedicated himself to art after studying law and literature. His first works, realized during the second half of the 1960s, were influenced by the gestures and artwork of Joseph Beuys. Between 1993 and 2007, Kiefer moved to Barjac, in southern France, where he transformed a 350,000-square-metre silk factory into his home and studio. Today he works in Croissy and Paris, although many of his large installations are still housed in Barjac, forming a sort of personal museum and Gesamtkunstwerk (literally “total artwork”). 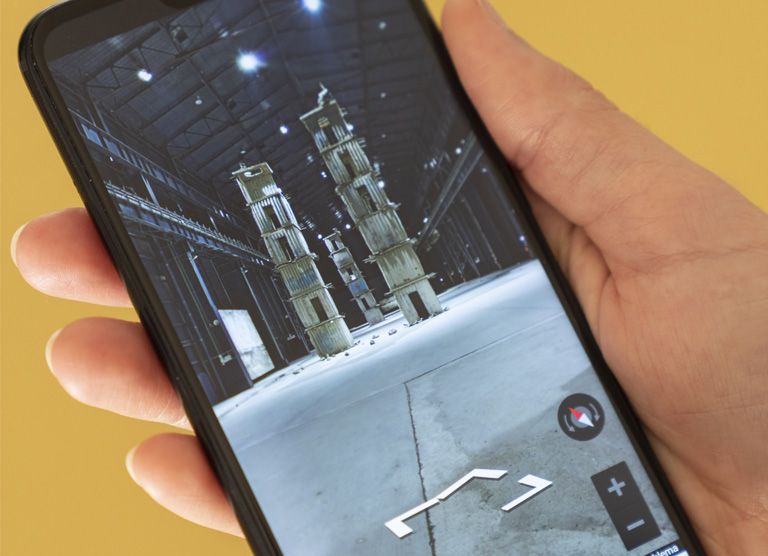 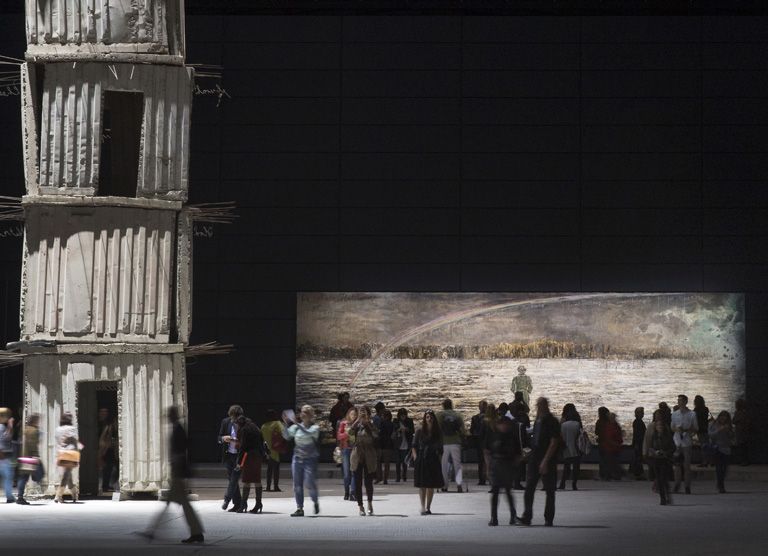 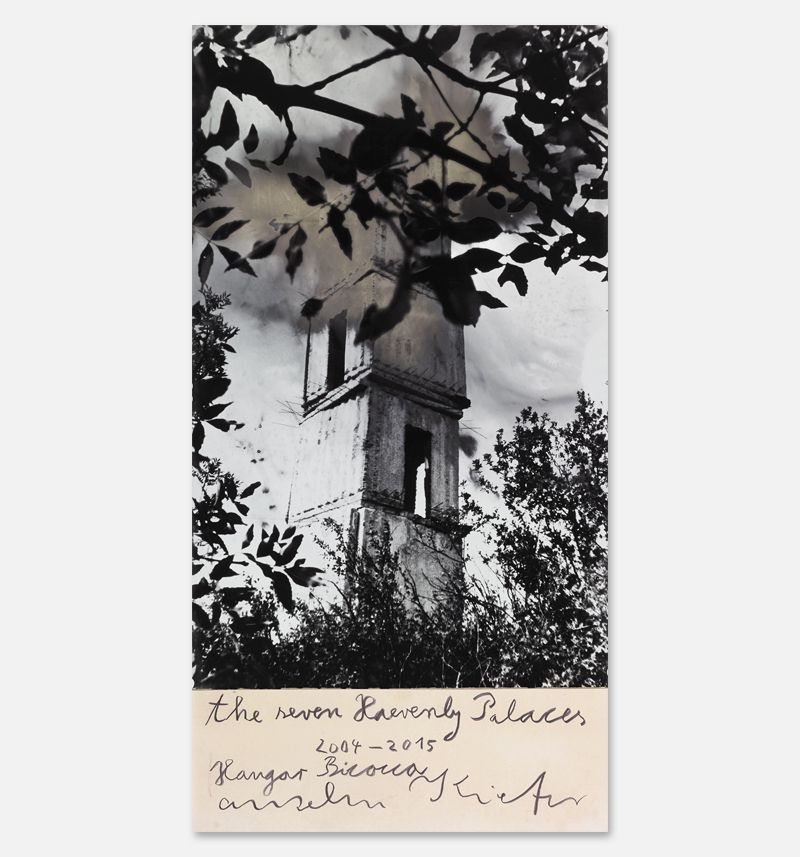