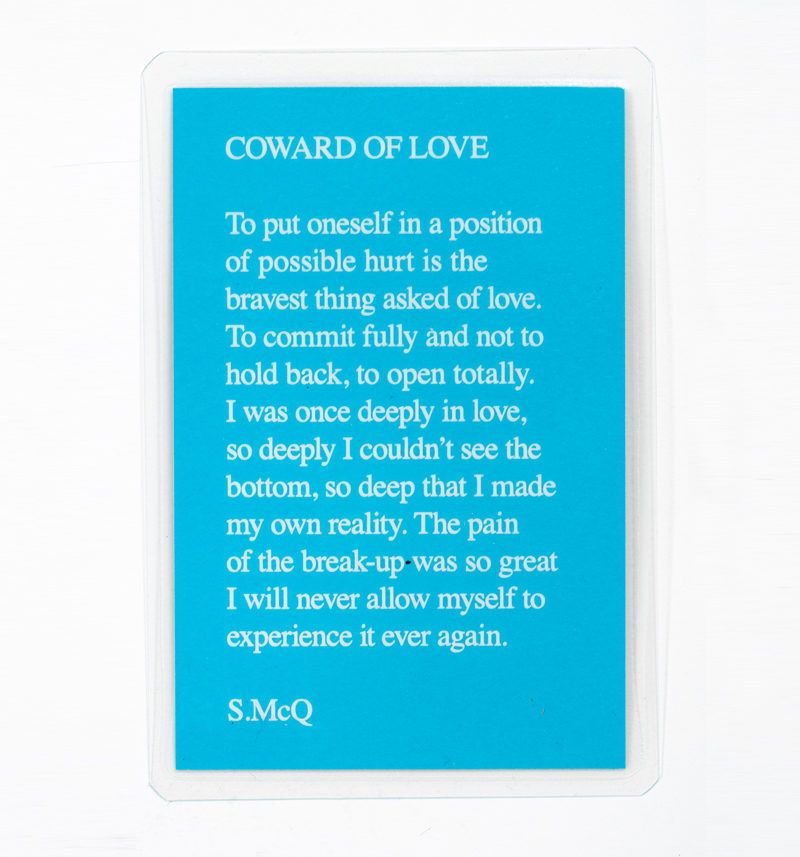 For further information, please write to the following email: bookshop@hangarbicocca.org

Coward of Love (2022) is a limited edition print that accompanies “Sunshine State,” Steve McQueen’s solo exhibition at Pirelli HangarBicocca. The work consists in a love sentence, written by the artist, printed on blue paperboards, enclosed and sealed in a transparent plastic coating. The choice of materials and the small format convey an intimate and personal dimension: in just a few lines, McQueen condenses conflicting emotions brought about by the sentiment of love. The spontaneity and immediacy of the artist’s words sound like a personal confession, recalling the introspective tone of other works in the show, such as Cold Breath (1999) and Sunshine State (2022).
Amongst the most prominent contemporary artists and filmmakers, Steve McQueen (b. 1969, London; lives and works in London and Amsterdam) has had a major influence on the way film is shown and understood, taking a radical look at the human condition, its dramas and fragility. McQueen’s solo exhibitions have been presented at many international institutions—he has also taken part in two editions of documenta in Kassel (2002 and 1997), and in four editions of the Venice Biennale (2015, 2013, 2007, and 2003), where he represented Great Britain in 2009. In 1999 he won the prestigious Turner Prize and, in 2014, the Oscar for Best Picture, with the feature film 12 Years a Slave (2013).