End is a work dedicated to the planet’s most remote locations – a visual requiem for extreme lands, a trip through the most distant peripheries of civilisation, where people and the environment are melded together. End is a research project into the image and the imagination of the end. 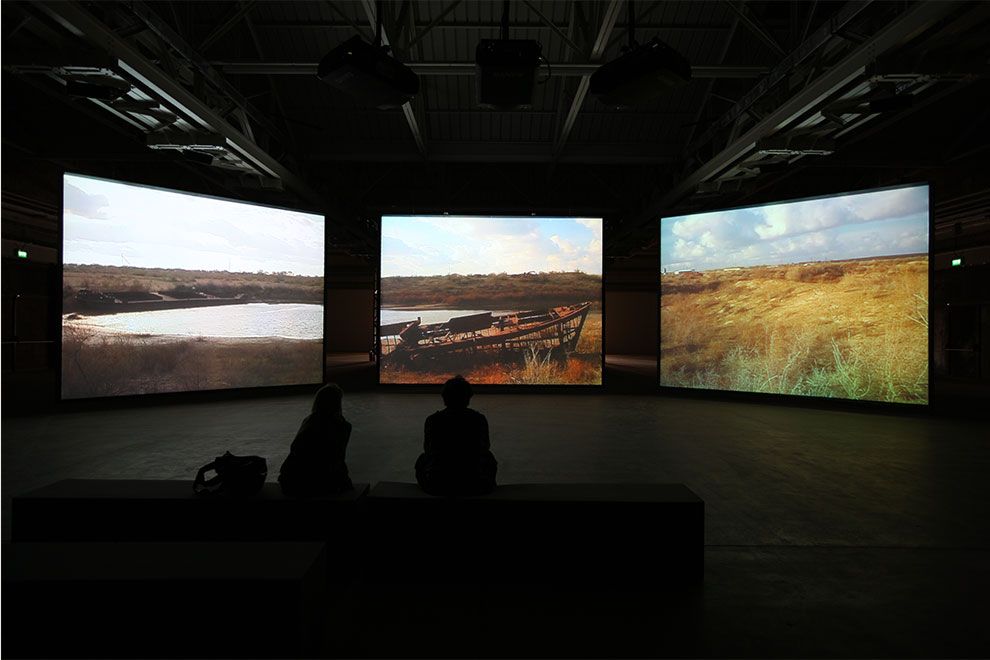 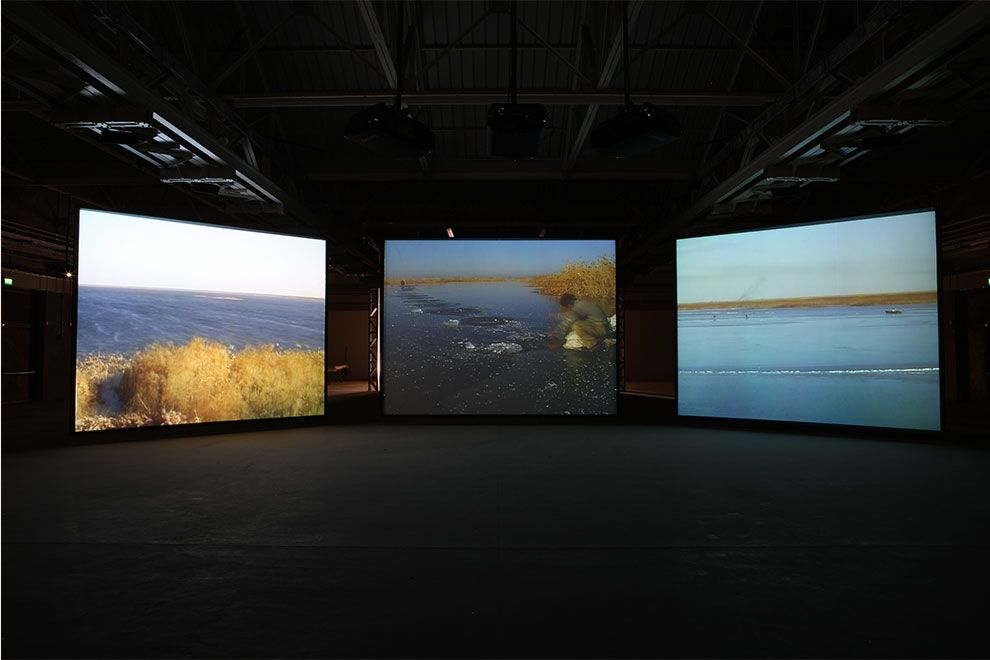 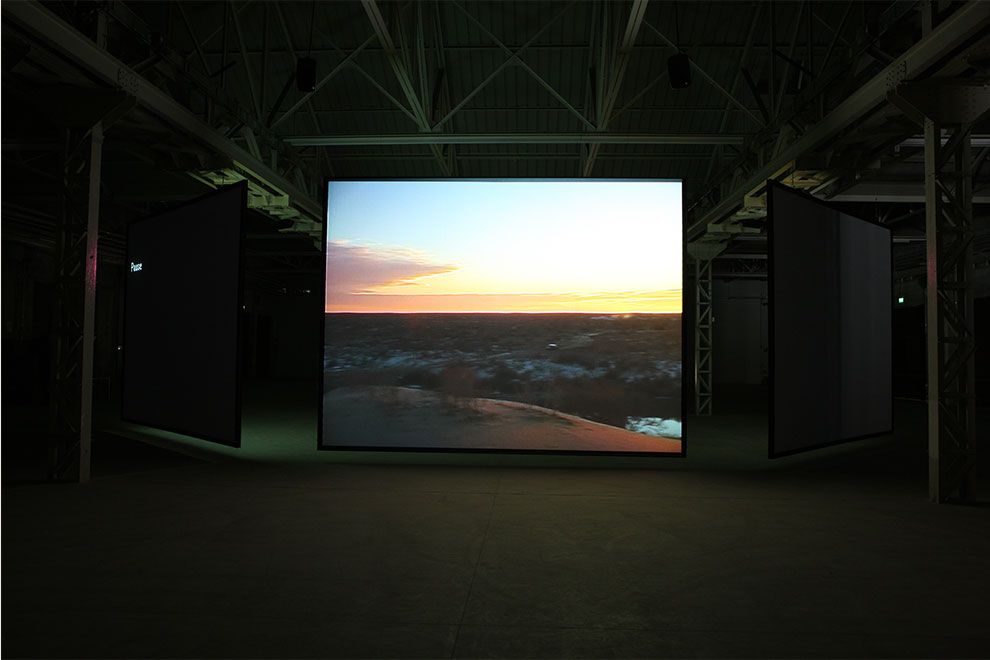 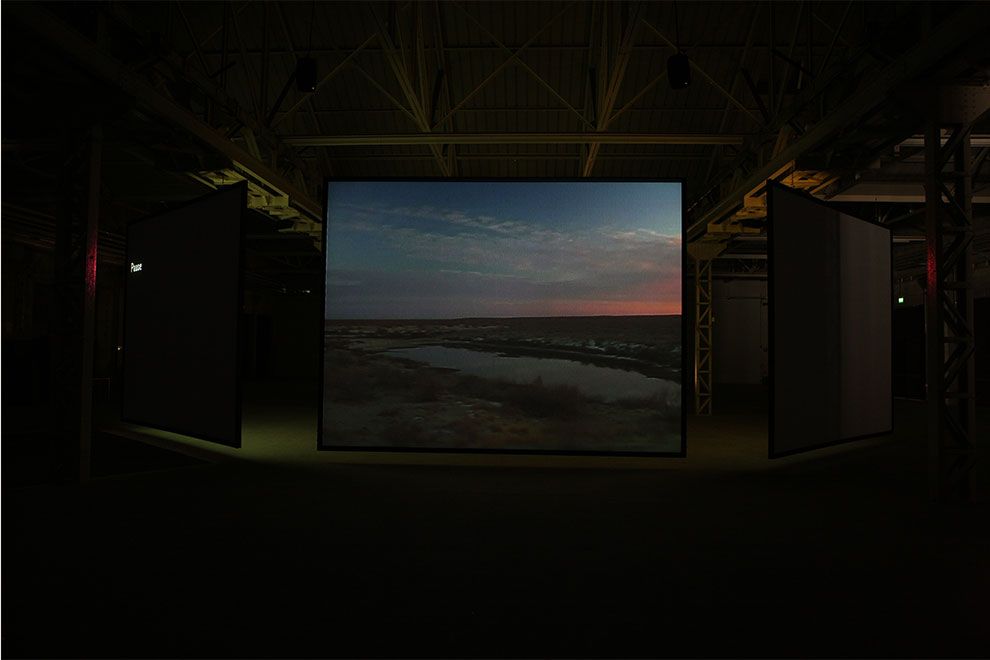 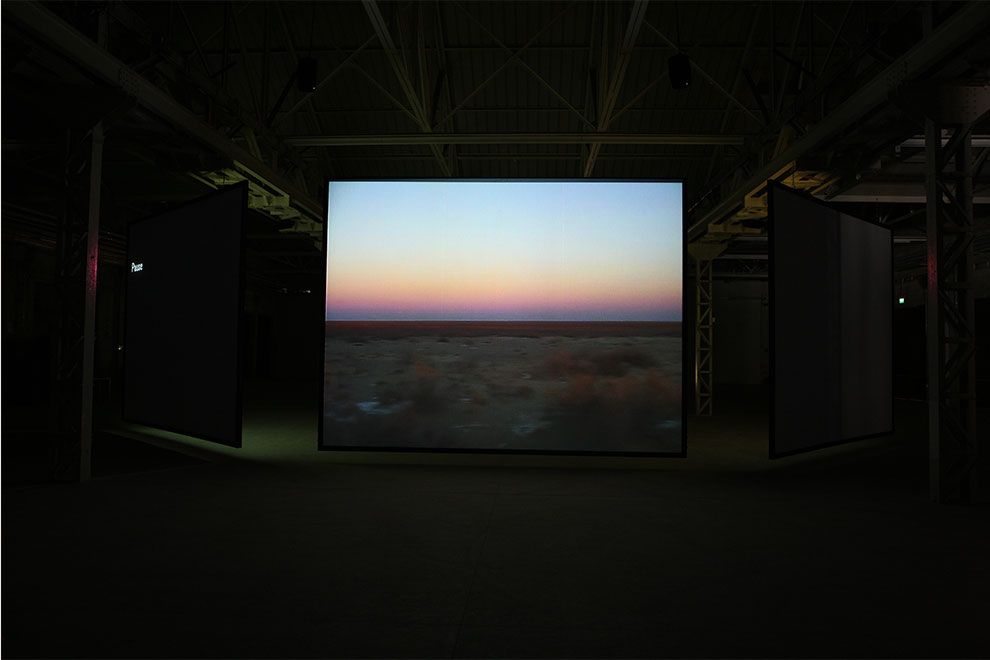 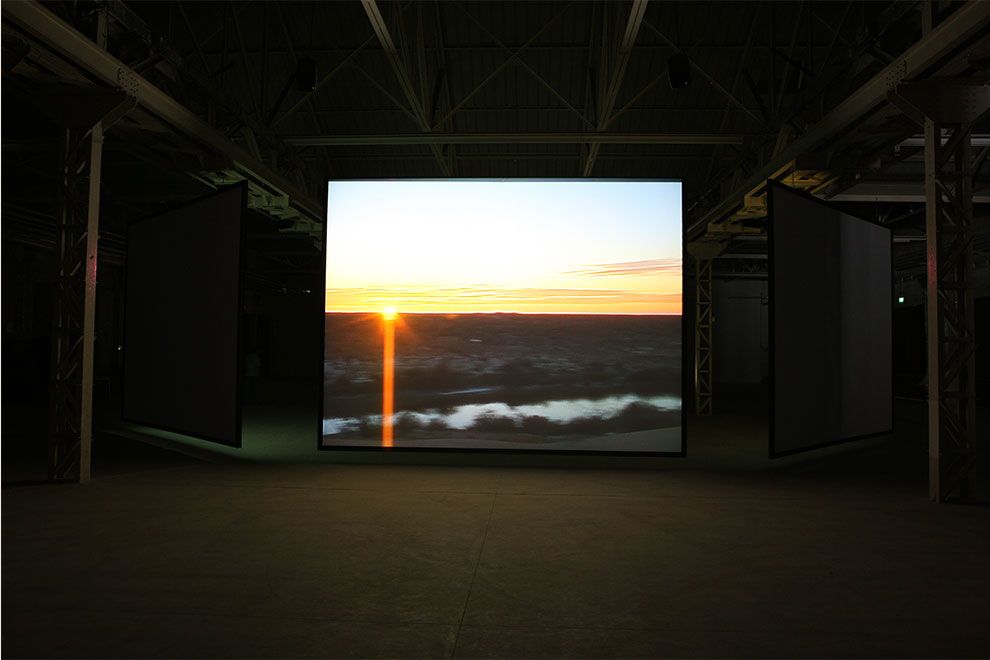 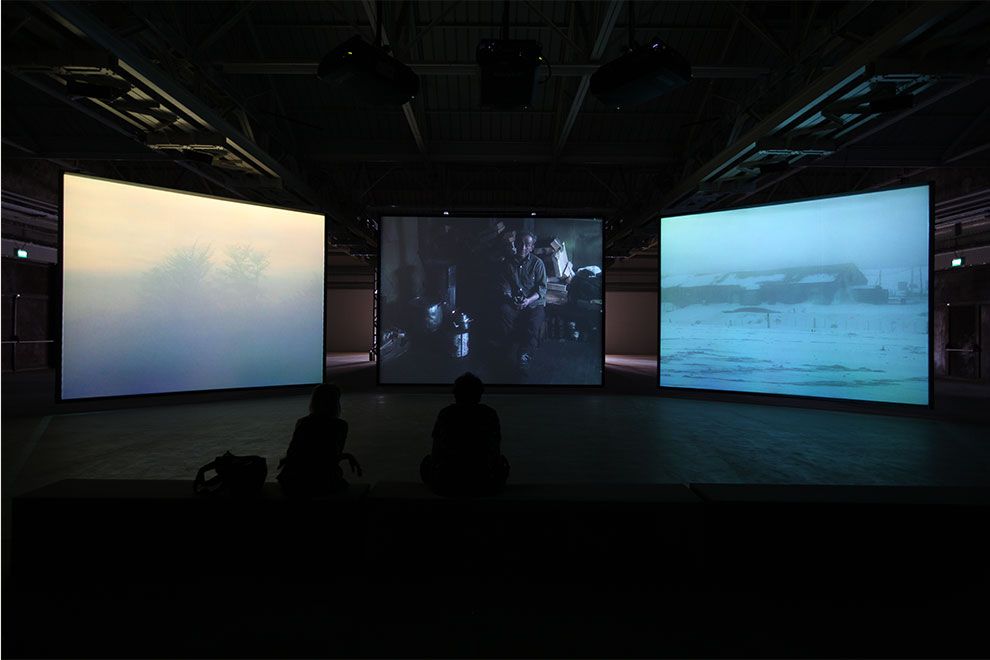 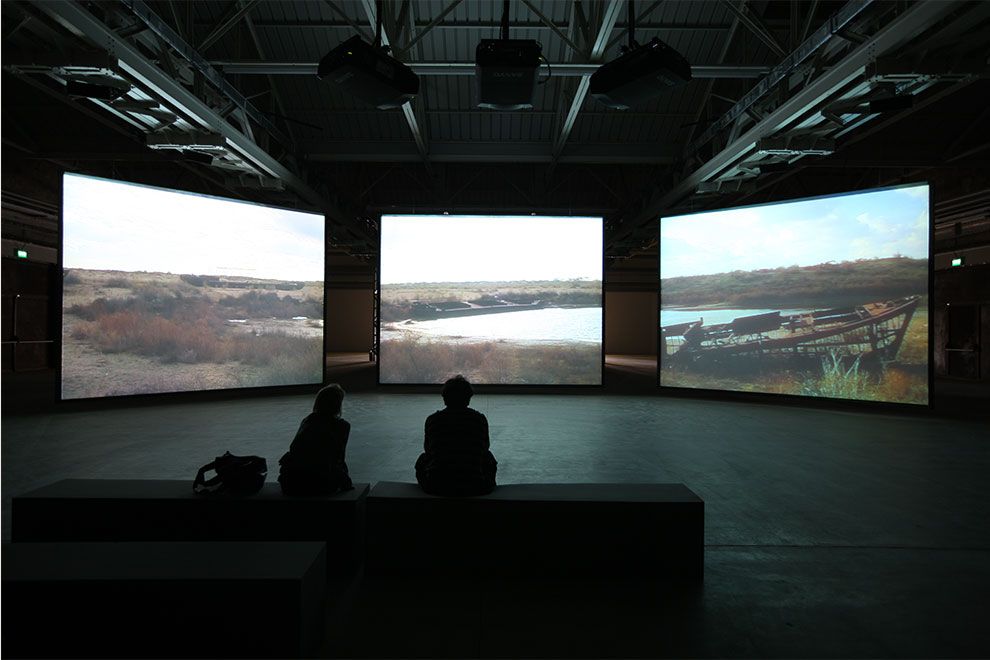 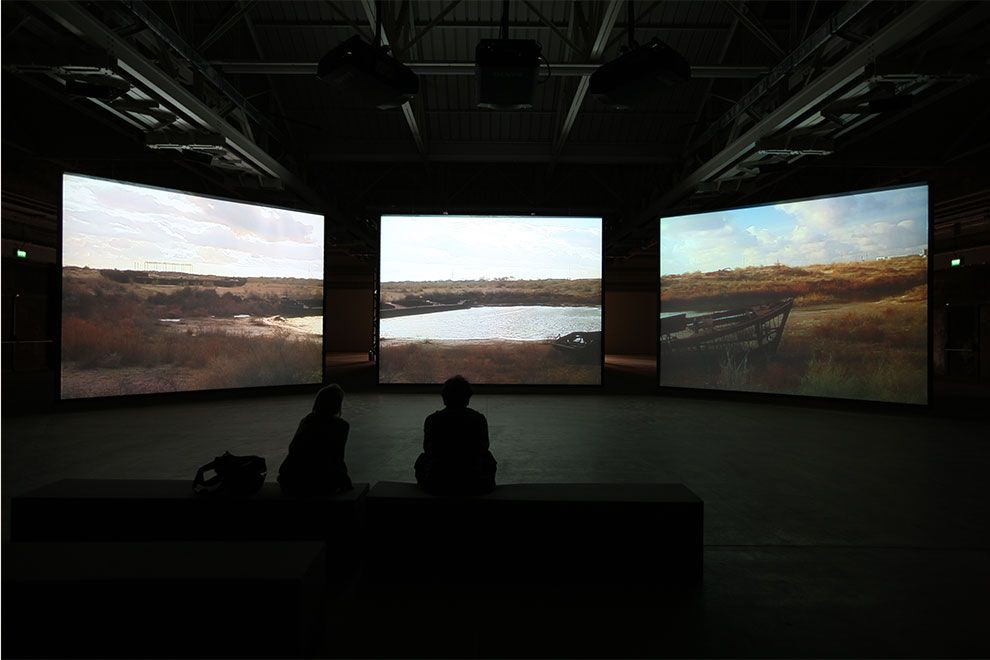 Given its world premiere at HangarBicocca, for which it has been specially created as part of the wider Terre vulnerabili project, END* is a three-screen installation that represents a selection of the works produced by Carlos Casas during the decades of arduous research he carried out in Lake Aral, Patagonia and Siberia, channelled into three documentary films, a lengthy series of single-channel videos and two audio-visual live events. End has two sides to it. On the one side – the front, structured like a cinema – three projectors display a video work in three acts dedicated to solitude, death and survival. Each act is the specifically re-edited version, expanded across three screens, of the films Solitude at the End of the World (2002-05), Aral. Fishing in an Invisible Sea (2004) and Hunters Since the Beginning of Time (2008). On the other side – the rear, which the visitor comes across at the entrance to the exhibition space – there are alternating Fieldworks shot in Patagonia (Light, Civilisation), Uzbekistan (Dead Sea, Gas) and Siberia (Borealis, White Night), put together randomly in such a way that End never repeats itself for the duration of the exhibition. The End trilogy is both a series of three documentary films (52 or 87 minutes in length), and a form of research carried out with fieldworks (static images or images with slow movements of the camera, based on radiofrequencies that go on to become part of the work and that function as alternative tools to capture the invisible layers of places) and archive material. Based on the disintegration, disappearance and imagination of the end in the peripheries of civilisation, the trilogy was shot in some of the most extreme environments on the planet: in Tierra del Fuego in Patagonia, on Lake Aral in Uzbekistan and in the Bering Strait in Chukotka, Siberia. The trilogy is imbued at the same time with a futuristic, visionary tension and with a sort of nostalgia for a past world that is inevitably destined to disappear; End is like an X-ray – carried out with a new approach, lying somewhere between the anthropological and the documentary/narrative – of lands and people on the frontier between vulnerability and invulnerability.
Filmmaker and visual artist Carlos Casas (Barcelona, 1974) conducts research in which film (documentary filmmaking, in particular), visual arts and music are incessantly intertwined and overlapped. Basing himself on the idea/guide of recording audio and video content directly in the field, without altering in the slightest the situations he comes across, Casas explores the most geographically, psychologically or socially extreme environments on the planet. Following his entry into Fabrica in 1998, he made the short film Afterwords, which was presented at the Venice and Rotterdam film festivals. Rocinha. Daylight of a Favela (2003) was his first full-length documentary (52 minutes long), and was shot in the largest favela in Rio de Janeiro. The next year saw the release of the first episode of End, the trilogy of films dedicated to those who live in extreme, remote situations on Planet Earth: Aral. Fishing in an Invisible Sea is the extraordinary tale of the lives of three generations of fishermen on Lake Aral in central Asia, set against the backdrop of one of the most serious environmental disasters ever perpetrated by Man. The film was named Best Documentary at the 2004 Turin Film Festival, and was selected at the Rotterdam Film Festival, at Visions du Réel in Nyon, at One World Prague and at Documenta Madrid, where it received a special mention from the jury. In 2005, he shot Solitude at the End of the World, the film that came about as a result of his research in Patagonia and scooped the special jury prize at the Buenos Aires International Film Festival in 2006. The trilogy of films came to a close with the recent Hunters Since the Beginning of Time, made in Siberia, which was named as Best Documentary at the Mexico International Film Festival FICCO 2008.
carloscasas.net Projection of the complete trilogy of END