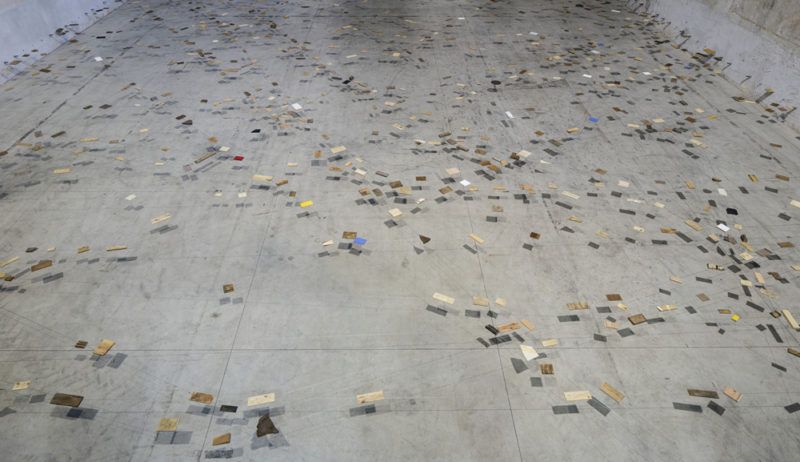 Pirelli HangarBicocca presents a music evening with three live concerts of leading artists emerging from contemporary explorations of sound and music. Inspired by the concept of “things” present in the work of Kishio Suga, Vibrating Fields is an immersive journey in which music is made apparent through the presence and interaction of bodies, objects and movements.

The program – which focuses on the material conditions that inform music making, performance and listening – opens with Hanna Hartman who, over the years, has adopted an intriguing collection of ordinary materials such as screws, metal bars, water or porridge. For live performances, she assembles them in different ways and reveals and arranges their sounds with ingenuity and intuition. Her music worlds bring us closer to the inner stuff of “things” and invites us to dream beyond their visible surfaces.
Thomas Ankersmit’s Otolith live spatial-sound performances follows proposing an hallucinatory experience where our skulls and ear cavities become sound sources. Music is literally plaid inside our heads fostering a listening experience which is specific to each one, depending on anatomy, location and head movement, unveiling the connectedness between the space and our own physical existence, all vibrating together.
The concert concludes with Thomas Brinkmann, one of the key figures within the experimental techno music scene that erupted in the late 1990s. He presents Klick (2000) a live concert referring to his landmark record from 2000. Adopting his typical minimalistic approach to music making, the performance evolves through combinant loops of repeating sounds extracted from vinyl records which he cuts with razors.  Along with exposing the materiality and mechanics that cross sound and audio, he enfolds them together with our subjectivity and inclinations towards dance.

HANNA HARTMAN
Hanna Hartman is a Berlin-based Swedish sound artist, composer and performer. Since the 1990’s she has been creating compositions that are exclusively made up from authentic sounds that she records and performances based on tactile movements and set-ups of quotidian props. Her remarkable work has been presented as radio works, electroacoustic music, sound installations and concerts, earning her many awards and grants such as Prix Europa (1998), the Karl-Sczuka-Prize (2005) and the Phonurgia Nova Prize (2006, 2016). During 2007 and 2008 she was Composer-in-Residence at the Swedish Radio. Her work has been presented in numerous concerts and festivals such as Darmstädt Summer Courses, Ultima Oslo, Huddersfield Contemporary Music Festival, El Nicho Aural in Mexico City and Akousma in Montreal.

THOMAS ANKERSMIT
Thomas Ankersmit is a Dutch musician and composer based in Berlin and Amsterdam. Since 2006 his main instrument has been the Serge Modular synthesizer. His work is centered around acoustic phenomenas such as sound reflections, infrasonic vibrations, otoacoustic emissions, and highly directional projections of sound. Ankersmit has long-term collaborations with New York minimalist Phill Niblock and Italian composer Valerio Tricoli. His work has been presented at venues such as Hamburger Bahnhof and KW, Berlin; Stedelijk Museum, Amsterdam; Kunsthalle, Basel; MoMA PS1, New York; and at festivals for experimental and contemporary music all over the world. Current projects include commissioned works for CTM and Berghain (Berlin) based on infrasound and architectural resonance, and for GRM (Paris) based on the research of Pierre Schaeffer.

THOMAS BRINKMANN
Thomas Brinkmann is an iconic German musician and producer renowned for audio works that hover amongst forms such as techno, minimalism and ambient. He became known in the late 90’s for his unique techniques utilizing customized dual-tone-arm turntables and for generating beats and patterns with self-carved vinyl records. In 1998 he founded Max Ernst label devoted to his own productions. He has since released an extensive number of recordings, also for Mute Records (under his house music moniker Soul Center) and more experimental work on labels such as Supposé and Raster-Noton (under the Ester Brinkmann alias), and more recently on Editions Mego.