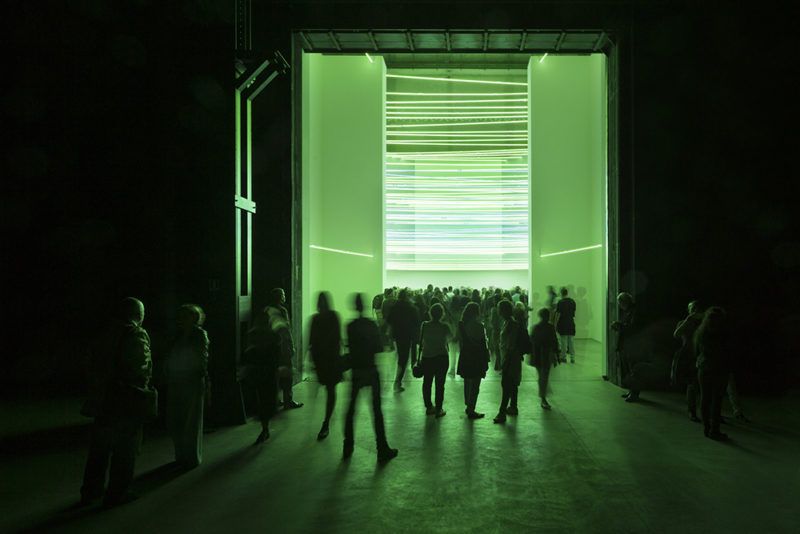 The Swedish-American writer, philosopher, scientist, mathematician and artist Catherine Christer Hennix has conceived a long-form musical composition for Lucio Fontana’s exhibition “Ambienti/Environments”.
This new piece, presented during two days, plays with standing sound waves and is developed with a virtual instrument Hennix has recently created. Using the Just Intonation system, the composition assumes an expansive and intricate durational form that does away with rhythm and time progression to explore stasis and pure sounds, resonating with Fontana’s refined use of monochromes as well as with his concepts of space.

Catherine Christer Hennix has been likened to the minimalism movement, following her connections with pioneers such as La Monte Young or Terry Riley. She studied with both Young and the Hindu master of the ragas Pandit Pran Nath during the 70’s and participated in the elaboration of the theoretical aspects of Young’s music. After having devoted the 1980s and 1990s mostly to mathematics and computer sciences, in 2003, Hennix resumed composition based on computer generated sound waves in the form of what she calls Soliton(e)s. In recent years, many artists have discovered the work of Hennix and decided to study and join the theories and practices she has developed. Her groundbreaking pieces from the 1970s – like The Electric Harpsichord and Central Palace Music – have been recently released on record.

Catherine Christer Hennix has presented works at the Grimmuseum (Berlin), Issue Project Room (New York), “The Long Now” (Kraftwerk, Berlin), Sonic Acts festival (Amsterdam),CTM and MaerzMuzik festivals (Berlin), Cafe OTO (London), amongst others. Her collected writings are presently being organized for the publishing of a new book in two volumes and her tape archive is being put together by Cornell University in the U.S. A small retrospective of Hennix’s visual work will be shown at the Stedelijk Museum in Amsterdam in 2018.