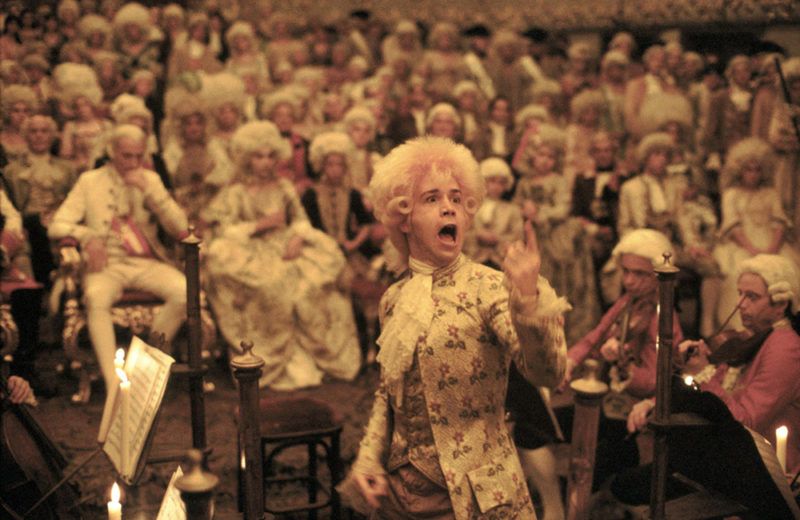 The films chosen by Ragnar Kjartansson

The films chosen by Ragnar Kjartansson is the sixth HB Public event dedicated to the films that have influenced the works of HangarBicocca artists. Kjartansson’s selection reveals some of his sources of inspiration and the recurrent themes in his work, with the mythicised figure of a creative genius, musical performances as moments of collective pathos, and a reflection on family and amorous bonds and affections. Music – and particularly that of Icelandic pop and rock – is the underlying theme that many of the movies in this review have in common: Kjartansson’s rapport with music is key to his artistic development, for when he was still a teenager he joined the Trabant electronic-rock band and since then he has worked with musicians and composers on many occasions.

The review starts with what has the artist has always considered a cult movie, ever since he was a boy: Amadeus, by Milos Forman, paints a fictionalised picture of the “genius and licentiousness” of Wolfgang Amadeus Mozart, one of Kjartansson’s favourite composers, and indeed he chose the final aria of Le Nozze di Figaro for his Bliss performance in 2011. Kjartansson has included no fewer than three concert-films in his selection: Martin Scorsese’s The Last Waltz, on the American group The Band‘s last performance; Heima, on the Icelandic band Sigur Rós’s tour of their homeland, in which the star players are nature and the atmospheres of the island on the edge of the world; and Rokk í Reykjavík, a collection of memorable performances by Iceland’s top rock bands in the early 1980s. Lastly, the two final films in the review can be considered as almost direct inspiration for The Visitors, a work on show at HangarBicocca: The Russian director Nikita Mikhalkov’s An Unfinished Piece for Mechanical Piano, taken from a play by Anton Chekhov, portrays a web of stories and dramas among a group of people gathered together in the space-time setting of a large country villa. Ingmar Bergman’s masterpiece Scenes from a Marriage, on the other hand, explores the disintegration of a marriage and divorce, which is also a key feature of Kjartansson’s work.

On Thursday at 9 pm
In collaboration with Fondazione Cineteca Italiana

Amadeus
The winner of no fewer than 8 Oscars with 11 nominations and based on the play by Peter Shaffer, the film tells the story of the alleged rivalry – a literary invention – between Antonio Salieri and Wolfgang Amadeus Mozart at the court of the Habsburg Emperor Joseph II in Vienna. The confessions of the ageing Salieri in a lunatic asylum, after he has attempted suicide, accompany the spectator towards a tragic climax in a pitiless analysis of the dramatic consequences of envy, a universal feeling which the Italian composer feels for the libertine Mozart, whose creative genius he acknowledges and, paradoxically, admires.

The Last Waltz
Martin Scorsese directs a documentary on the last performance of the rock group The Band, in November 1976 in the Winterland Arena in San Francisco, before they break up after sixteen years of concerts. Some of the great legends of the 1970s US musical scene, including Eric Clapton, Bob Dylan, Van Morrison, Ringo Starr and Neil Young, take part as friends in the great event that is The Last Waltz. Shots of the concert alternate with interviews with the members of the band, Rick Danko, Levon Helm, Garth Hudson, Richard Manuel and Robbie Robertson.

Scenes from a Marriage
A pessimistic reflection on the institution of marriage, Scenes from a Marriage paints a realistic fresco of ten years in the life of Marianne and Johann, a couple that appears to be perfect but whose union is actually a series of betrayals, misunderstandings and failures. The director, Ingmar Bergman – who at the time was about to divorce from his wife Liv Ullmann, the female star in the film – gives us a clear but critical analysis of the dynamics of marriage, from the initial idyll to infidelity, separation and reconciliation, almost entirely in the form of dialogue and based on the reciprocal demands for “self-analysis” of the two characters.

An Unfinished Piece for Mechanical Piano
Freely inspired by Anton Chekhov’s Platonov (1880-1881), the story unfolds slowly, reflecting the apathy and fatuousness of the guests invited by Anna Petrovina, the rich widow of General Vojnitzev, who organises a reception for relatives, friends, acquaintances and local notables in her stately residence. A widely acclaimed choral film by the still young Nikita Mikhalkov, An Unfinished Piece for Mechanical Piano dwells on the pettiness of a social class that has become decadent and bored, through the rekindling of passion involving the lady of the house and one of her youthful loves.

Heima
Dean DeBlois directs a documentary that, like the pages of a diary, tells the story of the two-week tour of the Sigur Rós, the post-rock band who return to their homeland (heima in Icelandic, and the title of their album) in the summer of 2006 after twelve years of successes abroad. Their journey starts out from little villages on the edges of the island and ends in the capital, Reykjavik. The enchanting photography of Heima poetically captures the magic and colours of a remote land of national parks, desolate wastes and ghost towns that form the backdrop for free concerts, alternating with interviews with members of the band.

Rokk í Reykjavík
A documentary devoted to the alternative Icelandic scene in the early 1980s, Rokk í Reykjavík (literally Rock in Reykjavík) is still remembered as one of the most important insights into the musical culture of the island, and indeed has become a classic in local cinemas. In the winter of 1982 the director Friðrik Þór Friðriksson put historic performances by the whole rock world of the time on film – with bands like the Tappi Tíkarrass (with a very young Bjork appearing during the show), Ego, Q4U and Purrkur Pillnikk – leaving room for short interviews with the great names of the period.