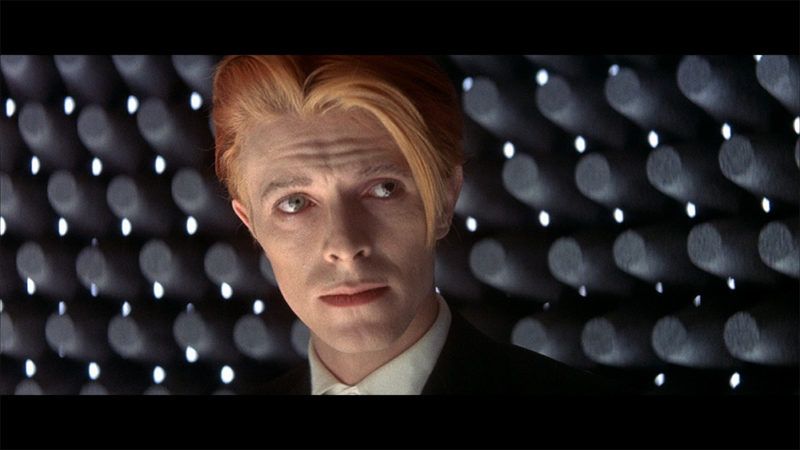 The Films Chosen by Carsten Nicolai

The Films Chosen by Carsten Nicolai is HB Public’s second event devoted to the films selected by HangarBicocca artists. Viewers are given a further, unmissable opportunity to broaden their vision of the exhibition, as they are taken into the artist’s cultural world through the fascinating, evocative art of cinema.
The films chosen by Carsten Nicolai – an artist, musician and leading figure in the world of artistic experimentation in Germany – belong to a visual and thematic universe that takes from science-fiction and from surrealism. Some of them are being shown for the first time in Italy, and in all cases the directors and protagonists (ranging from the very young George Lucas and David Lynch through to David Bowie at the height of his career), coupled with their highly imaginative, visionary immediacy, have made them authentic cult movies among artists, filmmakers and aficionados. Even though they are very diverse in terms of period and style, they portray a world transformed by technology and the media in which we see, against post-apocalyptic or futuristic backdrops, adventurous, surreal events that revolve around the great issues of our contemporary world. The themes concern mind-control by the media and technology, the pervasiveness of machines in our everyday lives, and the conflicts between increasingly standardised and regulated societies and the individuals who rise up against them.

La Jetée
Possibly the most famous short in experimental cinema, the film consists of a sequence of photographs with an off-screen narrator. This forms an authentic graphic novel on film, which tells the agonising story of a man in search of his own past. Set in a destroyed, post-atomic Paris in the aftermath of the Third World War, the protagonist in La Jetée is the prisoner of an oppressive regime that uses him as a guinea-pig in time-travel experiments. We see him move between past and future in search of the woman he loved. Her face has remained impressed on his own memory as a child, tormenting him. The film, which takes its title from the observation platform of the airport where the key scene takes place, tells us of the impossibility of changing our destiny. It talks of the power of images over our minds and of nostalgia for a world that already in the 1960s appeared to be on the verge of disappearing forever.

THX 1138
The first feature film by the director of Star Wars, this film is a masterpiece of visual experimentation and of the imagination. It is relatively unknown by the general public due to its almost experimental style and to the delicate issues its deals with: social control by machines and the media, the repression of sexuality and the use of psychotropic drugs and religion by totalitarian regimes. Set in a nightmarish future in which people live underground and are referred to by numbers rather than names, the movie tells the story of an individual, THX 1138, who struggles to regain his own humanity, love and, ultimately, freedom. The film was restored and re-edited in 2004 by the director himself and still today it is astonishing how, even forty years ago, it managed to anticipate issues and visual forms that were to enter into the popular imagination.

The Man Who Fell to Earth
Based on the novel of the same name by Walter Tevis, the film became famous due to the presence of David Bowie, in his first starring film role. Bowie acts the part of Thomas Jerome Newton, an extraterrestrial who happens to land on Earth in search of water for his own dying planet. He becomes a rich industrialist but is gradually caught up in a frightening downward spiral that culminates in the discovery of who he really is, when he finds himself trapped forever on Earth. With its intentionally intermittent, non linear narration and its sophisticated visual style, The Man Who Fell to Earth is a parable about decadence on Earth as seen through the eyes of an “alien” who is incapable of adapting to human cynicism. The stereotypes of science-fiction movies are turned around and the film points towards themes that have now become highly topical, including the environmental crisis and the excessive power of multinational corporations.

Alphaville. Une étrange aventure de Lemmy Caution
Alphaville: A Strange Adventure of Lemmy Caution was inspired by the surrealist poet Paul Éluard’s Capitale de la douleur. Caution, a secret agent posing as a journalist, arrives in Alphaville, a city in the future suspended in space and ruled by Alpha 60, a computer that deprives the inhabitants of their emotions and feelings. The computer is designed by Dr Von Braun, previously known by the name of Leonard Nosferatu. Written and directed by Jean-Luc Godard, it is only apparently a sci-fi movie. Set in modernist locations in 1960s Paris, the futuristic element is intentionally presented as a parody of the spy-movie genre, which is that of the investigator Caution, a character who had already been played by Eddie Constantine. Here he lends himself to Godard’s chief interest, which is to create an atmosphere and experiment with light and sound.

The Elephant Man
Shot in black and white so as to make the Victorian setting more believable, The Elephant Man was David Lynch’s first success and still possibly one of his most famous films. It takes up the theme of diversity and deformity that had already emerged in his first feature film, Eraserhead. Set in the late nineteenth century, it is based on the life of Joseph Merrick (John Merrick in the film), a man with a disease that gradually deformed his face and body. The film is the heart-wrenching story of the battle for human dignity fought by a man whose monstrous appearance conceals a sensitive, cultured person within. A metaphor of the conflict between the rationality of science (as represented by Treves, the doctor who rescues him from his destiny as an exhibit in a freak show) and the power of social prejudice and irrationality, The Elephant Man has become an emblem of visual and narrative courage.