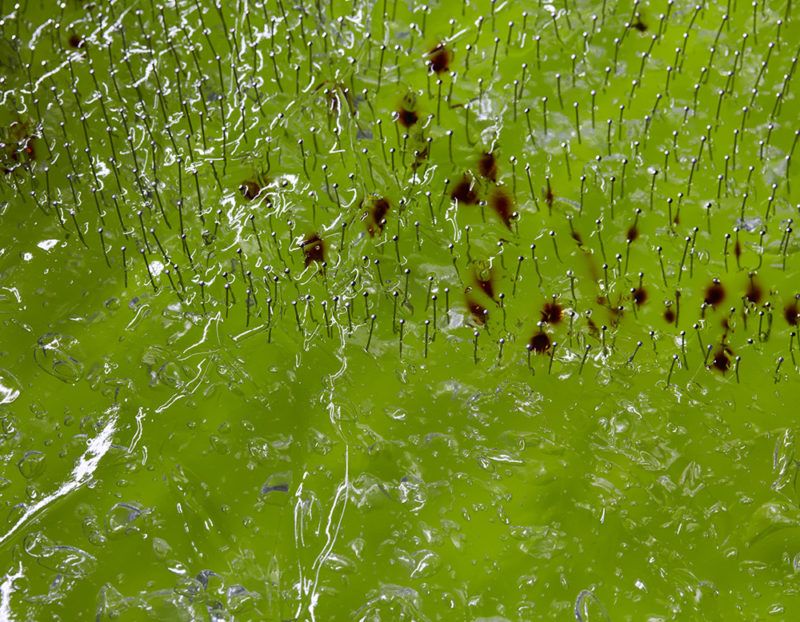 With the participation of

Sensory Ecologies is an appointment of the Public Program | Anicka Yi dedicated to the exhibition “Metaspore” that expands and develops the concepts and ideas generated by the exhibited works. The Symposium brings together an interdisciplinary panel of speakers: Mόnica Bello, Curator and Head of Arts at CERN at the European Organization for Nuclear Research in Geneva; Jane Calvert, Sociologist of science, Professor of Science and Technology Studies at the University of Edinburgh; Harmony Holiday, multidisciplinary artist, writer and poet; Hsuan L. Hsu, Professor of English at the University of California Davis and the author of The Smell of Risk: Environmental Disparities and Olfactory Aesthetics (2020); Studio Klarenbeek & Dros a design studio based on research of sustainable projects and new materials; Barbara Mazzolai, Director of the Bioinspired Soft Robotics Laboratory at the Istituto Italiano di Tecnologia in Genoa.

They will address a central and urgent question of our times: can the biological sensorium (both human and non-human) be reconciled with contemporary technology?

Through diverse perspectives, the symposium seeks to build a constellation of knowledge and navigational tools, drawing from the disciplines of art and design, media studies, science and technology studies, general and synthetic biology, and literature.

During the evening a special projection of Anicka Yi’s The Flavor Genome (2016) will be screened in a 2D version, conceived as a reference point for the discussion. The Flavor Genome is a techno-sensual journey into the unexplored threshold of adaptation, mutation and hybridization of living organisms. Under the conceptual premise of the “Flavor Genome” the video performs a mapping of perceptual worlds, taking reality as matrices of perceived unique essences which could enable the potential for biodiverse intelligence sharing.

The symposium is curated by Giovanna Amadasi, Remina Greenfield and Anicka Yi.

The panels will be held in English. Simultaneous translation is provided.

Admission to the event is free.

Places are limited and booking is required. Reservations on this page.

The Symposium reservation includes access to all exhibitions.
On this occasion, the exhibitions will be open until 10PM.

Admission to the event is allowed only to visitors owning a valid Digital Covid Certificate “Super Green Pass” complete with QR Code (vaccination certificate or recovery certificate confirming the holder has recovered from Covid-19), to be provided at the entrance together with an identity document. The Digital Covid Certificate “Super Green Pass” is required to all visitors over the age of 12 (visitors under 12 years old do not need any documentation to access the exhibition spaces).

During the event is mandatory to wear a FFP2 mask.

As enthusiasm rapidly mounts towards concepts such as Web 3.0 and the Metaverse, Sensory Ecologies asks invitees to scrutinize how the human sensorium is poised to be fragmented, extended, and controlled. What are the greater ecological and political consequences of choosing to leave the human sensorium primarily in the biosphere versus the technosphere?

This symposium invites participants to assess the social and environmental stakes of this question and consider how power and capital operate within these spheres. In other words, who or what might stand to gain from the transformation or exclusion of the bodily sensorium?

Conversely, how might we resist a sense of Cartesian mind/body dualism and develop contemporary technologies in a more “biologized” way? Looking towards the biological sciences, art, sociology, literature and design this symposium searches for model organisms and systems that might offer guidance, or even lines of flight, as we navigate an increasingly networked and machine-mediated perceptual world.

Moving beyond the universalizing approach of modern technology and into a creative space of multiplying and porous technodiversities, what new technologies, designs, networks, sensations, and approaches would we like to see proliferate?

Mónica Bello is an art historian and curator. Since 2015 she is Curator and Head of Arts at CERN at the European Organization for Nuclear Research in Geneva. Arts at CERN fosters dialogue between artists and scientists at one of the world’s leading laboratories. She co-curated the exhibition Quantum/Broken Symmetries that comprises ten artworks from Arts at CERN and toured internationally from 2018-2020. She is the Curator of Icelandic Pavilion for the Venice Biennale 2022 with the artist Sigurður Guðjónsson. She was Guest Curator for the prestigious Audemars Piguet Art Commission for Art Basel 2018. Formerly Artistic Director of VIDA in Fundación Telefónica (2010-2014) and Head of Education at Laboral Centro de Arte Gijón (2008-2010).

Jane Calvert a sociologist of science, is a Professor of Science and Technology Studies at the University of Edinburgh. She is fascinated by attempts to engineer recalcitrant biological systems in the emerging field of synthetic biology and recently completed a project called ‘Engineering Life’ on this topic (funded by the European Research Council). She is currently investigating the place of the organism in synthetic biology, inspired by a study of synthetic yeast. She values interdisciplinary collaborations highly and was one of the instigators of the “Synthetic Aesthetics” project, which brought together biologists, engineers, artists, designers and social scientists to explore what it means to design living things.

Harmony Holiday is a writer, dancer, archivist, filmmaker and the author of 5 collections of poetry including Hollywood Forever (Fence Books, 2014) and the forthcoming Maafa (Fence Books, April 2022). She curates an archive of griot poetics and a related performance series at LA’s MOCA and at a music and archive venue 2220arts that she runs with several friends, also in Los Angeles. She has received the Motherwell Prize from Fence Books, a Ruth Lilly Fellowship, a NYFA fellowship, a Schomburg Fellowship, a California Book Award, and a research fellowship from Harvard. She’s currently showing a film commissioned for LA’s 2020-21, and working on a collection of essays and a biography of Abbey Lincoln, in addition to other writing, film, and curatorial projects.

Hsuan L. Hsu is a professor of English at the University of California, Davis and the author of The Smell of Risk: Environmental Disparities and Olfactory Aesthetics (NYU Press, 2020). His research in the areas of American literature and culture, race studies, environmental humanities, and sensory studies has been supported by the American Academy of Arts and Sciences, the Andy Warhol Foundation’s Arts Writers Program, the National Endowment of the Humanities, Stanford University’s Center for Advanced Study in the Behavioral Sciences, and the Obama Institute for Transnational American Studies.

Eric Klarenbeek and Maartje Dros have collaborated on R&D and design projects since 2014, striving for new local economies and production chains, material development and durable design objects. For their projects they connect universities, high-tech companies as well as farmers with local producers.
The Mycelium Project started with the creation of the Mycelium Chair (NL, 2010), which was published and exhibited extensively and resulted in the founding of a company for mycelium-based products named Krown (NL, 2017). Also the studio worked on the development of biopolymers from local sources, 3D Bakery (NL, 2015), AMS “Circular Supply Chain for the City” (NL, 2016) and the Algae Lab at Luma, Arles (FR, 2017), resulting in algae-based products by integrating durable and sustainable production methods. Their newest network is called the Seaweed Circle, which integrates and introduces a seaweed-based production network focusing on seafarmed biopolymers; ©Weedware

Barbara Mazzolai, a biologist with a PhD in Microsystem Engineering and an international master’s degree in Eco-Management at the Scuola Superiore Sant’Anna of Pisa, is Associate Director for Robotics and Director of the Bioinspired Soft Robotics Laboratory at the Istituto Italiano di Tecnologia in Genoa. Her research starts by studying animals and plants which aims at developing robots that imitate their functions for environment exploration and monitoring. She created the first robot inspired by plant roots (the Plantoid) and coordinates several European projects on bioinspired robotics (including GrowBot and I-SEED). Since May 2021, she has led the I-WOOD project, funded by the European Research Council (ERC), which aims to develop smart robots that can monitor the health of the underground environment. Her Books include La Natura Geniale (Longanesi, 2019) and Il futuro raccontato dalle piante (Longanesi, 2021). 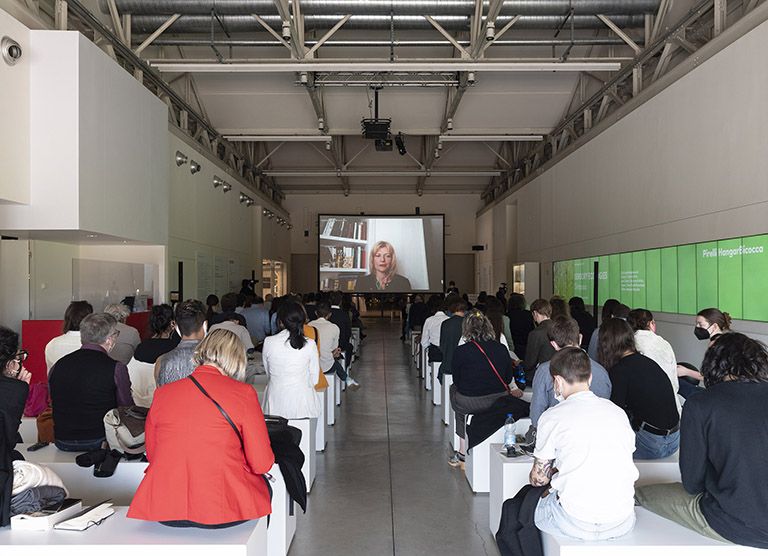 Barbara Mazzolai | From Nature to Nature Jave Calvert | Towards a collaborative sensorium