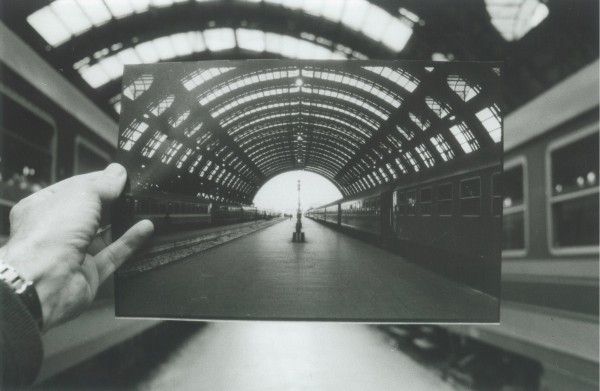 First live diffusion in italy of La Stazione by Herbert Distel (1942, Bern), essential contribution in the ambient-concrète musical composition field and one of the most important episodes in the history of the relations between contemporary art, conceptual practices and music. La Stazione has been realized in 1987 starting from the audio recordings of the Central Station in Milan.

The presentation of the sonic work by Herbert Distel constitutes the last part of the project I was driven on and on, a program of meetings on the ways of relationship between disorientation/obsession and production/sharing, which took place in Rome, Venice and Milan during 2011. The HangarBicocca Foundation collaborates with the Swiss Institute of Rome, welcoming the diffusion of La Stazione by Herbert Distel. The occasion offered by the Institute inserts besides in a project by HangarBicocca aimed to the rediscovery and the proposal of seminal artistic figures marked by a trans-disciplinary career and linked to the territory of Milan.
In 1987 the Swiss artist Herbert Distel realized a series of Field Recordings within the Central Station in Milan, which constituted the base for the creation of an experimental work in five parts divided in two acts. Considered as one of the masterpieces of ambient-concrète music, La Stazione has been created following the model of the opera La Collina (1947) by Mario Peragallo and is based on the Spoon River Anthology.

The subtitles of each part are based on announces of the railway station which mingle with a continuous musical base. You can distinguish at the same time the trains clatter, the doors closing, different announces, whistles of conductors and people running. All the sonic sources have been elaborated and layered, giving thus shape to a unique sonic landscape, with a dreamy combination between industrial noises and reverberations.
Herbert Distel is a conceptual Swiss artist whom realizes works and produces situations which in different ways propose new ways of having relationship with the real, be it the 20th century history of art and its link with museology (Museo dei Cassetti, 1977), or the production of great dimension sculptural objects abandoned in the ocean (Project Canaris, 1970) or the relationship among space, individuals and sound, as in the work La Stazione.

Herbert Distel (Bern, 1942) has studied lithography in Paris at the École Nationale Supérieure des Beaux-Arts (1963-64) and started to realize egg shaped sculptures and in 1970 gave life to Project canaris, in which he put in water a three meters polystyrene egg along the western African coast which then reached the Trinidad coast seven months later. In the same year he installed Monumento Canaris, a 22 tons granite egg, along the road between Basel and Chiasso. Between 1970 and 1977 Distel produced one of the first known examples of the use of museum practices by an artist through is his Museo dei Cassetti (Drawers’ Museum – Das Schubladenmuseum), a cupboard with 25 small containers gathering works of artists such as Arnulf Rainer, Pablo Picasso, Joseph Beuys, John Baldessari, Carl Andre, Nam June Paik, Valie Export, Ed Ruscha, Dieter Roth or John Cage. The Museo dei Cassetti was one of the three artist museums exposed by Harald Szeemann at Documenta 5 (1972), and then presented at the Cooper-Hewitt Museum in New York and actually belongs to the Kunstmuseum Zurich collection. Since 1985-1987 Distel Studied in Berlin with the directors Krzysztof Kieslowski and Edward Zebrowski. In 1993 Distel and Peter Guyer completed the video Die Angst Die Macht Die Bilder des Zauberlehrlings, starting from Sound footage. Soundwork (1971) is his first work based on the use of sound, created starting from a re-editing of the Apollo 13 astronauts’ voices, mingled with the Rhapsody in Blue by George Gershwin.