the eye, the eye and the ear “the eye, the eye and the ear” is Trisha Baga’s first institutional exhibition in Italy and covers fifteen years of the artist production, from her first piece There’s No “I” in Trisha (2005-2007), conceived as a sort of TV sitcom that questions the gender stereotypes of all the various characters whose roles Trisha Baga plays; to the more recent work 1620 (2020) produced on the occasion of this show. Bringing together five video installations investigating the relationship between the body and the constantly evolving image technology, the exhibition also presents a rich selection of ceramic works produced since 2015 and six pieces from the series Seed Paintings (2017), composed of sesame seeds and foam. 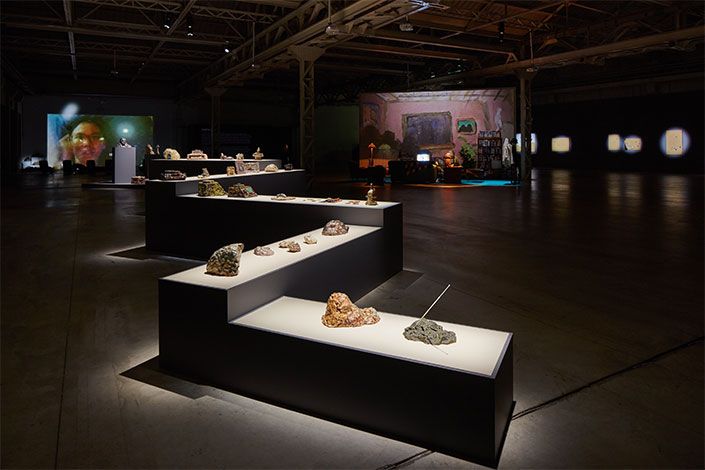 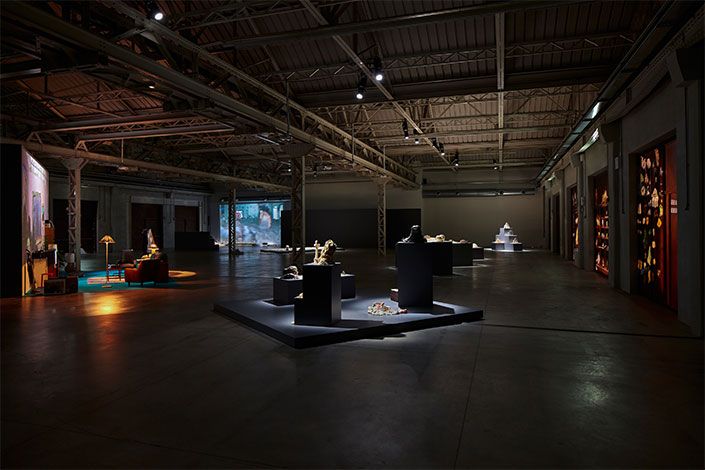 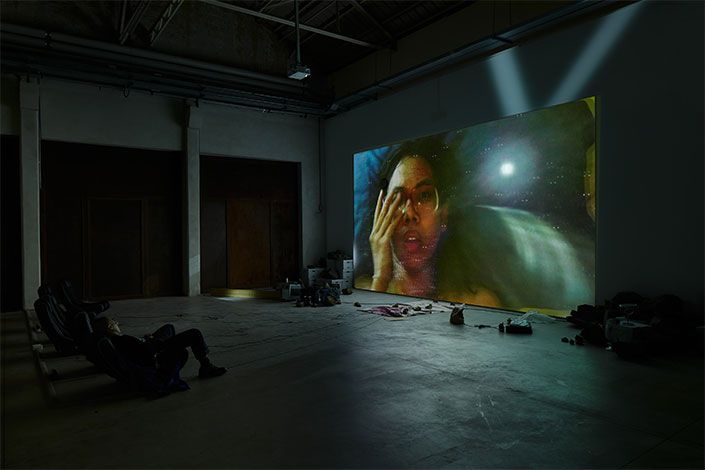 Trisha Baga (born in 1985 in Venice, Florida, currently lives and works in New York City), an American of Filipino origin, is one of the most innovative video-makers of her generation, combining different languages and other media, drawing from television and film imagery along with home movies. She grapples with such themes as gender identity, relations between the real and the digital world as well as technological evolution, in order to disclose a different perspective of our contemporary imagination.
The exhibition meanders through the various media, which have characterized Trisha Baga’s career, ranging from VHS cassettes and DVDs to 3D devices, and is deeply rooted in her performative practice. Visitors are invited to experience the show as if immersed in an environment which expands the physical space through numerous visual and sound layers.
The show’s display hints at the aesthetics commonly found in natural history museums, not only in its style of presentation, but also by using an unusual classification system that intertwines the idea of the fossil with high-tech devices such as today’s virtual personal assistants, thus creating a sort of temporal short-circuit. Through her ironical and witty perspective Trisha Baga focuses on the excessive reliance and hopes we put on technology, staging in her work its most fragile and failing aspects.
A number of international institutions have hosted this artist’s solo shows, including Gallery TPW, Toronto (2018); CCC, Carpenter Center for the Visual Arts, Harvard College, Cambridge (2017); 356 Mission Road, Los Angeles (2015); Zabludowicz Collection, London (2014); Peep-Hole, Milan (2013); Whitney Museum of American Art, New York, Kunstverein München, Munich (2012). Her works have also been presented in many group exhibitions and other events, such as at Los Angeles County Museum of Art, Los Angeles (2018); Aïshti Foundation, Beirut (2017); Whitney Museum of American Art, New York, Biennial of Moving Images, Centre d’Art Contemporain Genève, Geneva, Folkwang Museum, Essen, Manifesta 11, Zurich (2016); Musée d’Art Moderne de la Ville de Paris, Paris (2015); Center for Performance Research, New York (2010). There’s No “I” in Trisha In the Catastrophic Year AD 2020, a Fabulous New Book!

Trisha Baga. the eye, the eye and the ear